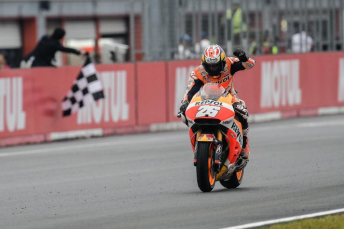 Dani Pedrosa has taken his first win of the season after he ran down Jorge Lorenzo in a weather-affected Japanese MotoGP at Motegi.

Valentino Rossi extended his championship lead with second place, while Lorenzo managed to at least complete the podium.

Rain had fallen during the day, and while puddles covered the circuit in many places, the race started with dry skies.

Lorenzo and Rossi traded the lead through the first handful of corners before the Spaniard blazed away to a 3.4s lead after just seven of 24 laps.

The last start winner still led by 3.5s with 15 laps completed but it had become clear that third-placed Pedrosa was the fastest man, the Movistar Yamahas battling deteriorating front tyres on the drying track.

Pedrosa took Rossi at the V Corner on Lap 16, then overcame the 2.7s deficit to the leader in just two more laps.

Rossi was also rapidly reeling in his teammate by this time, and Lorenzo gifted second position on Lap 20 when he couldn’t pull bike #99 up at Turn 3.

Meanwhile, Alex de Angelis had been diagnosed with bruising of the lung, rib fractures, and five fractured vertebrae after a crash during Free Practice 4.

de Angelis fell heavily between Turns 9 and 10 and was taken to Dokkyo Hospital for treatment.

It is unclear if surgery will be required.

The MotoGP World Championship now moves on to Phillip Island for the Australian MotoGP from October 16 to 18.