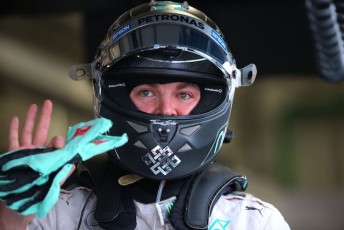 The German driver had dominated qualifying at Sochi before posting a 1:37.113s effort to claim pole by 0.320s from title rival Hamilton.

Hamilton was unable to match Rosberg’s pace throughout with his session ending with a mistake that saw him run wide at Turn 12 on his final run.

Williams’ Valtteri Bottas emerged as the best of the rest in third, with the Finn ahead of the Ferrari duo of Sebastian Vettel and Kimi Raikkonen.

Local favourite Daniil Kvyat narrowly missed out on a spot in Q3, leaving the Red Bull driver to settle for 11th on the grid for his home race.

The Russian will start alongside Sauber’s Felipe Nasr with McLaren’s Jenson Button in 13th position.

Felipe Massa struggled for speed in Q2 which saw him well adrift of the front running pace in 15th spot, behind the Lotus of Pastor Maldonado.

McLaren’s Fernando Alonso was the first knocked out of Q1 although the two-time world champion will be demoted to back of the grid as a result of a 25 place grid penalty for a change of engine components.

Marcus Ericsson will start from 16th ahead of the two Manor entries of Will Stevens and Roberto Merhi.

Toro Rosso’s Carlos Sainz was absent from the session following a high speed Practice 3 crash that saw the Spaniard airlifted to a nearby hospital.

Scans have since revealed that Sainz escaped the incident without injury.

Next Story Sainz eager to race after hospital release