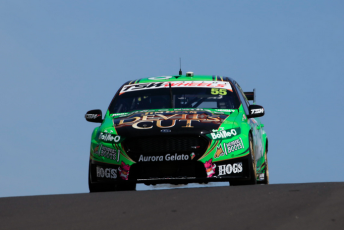 This year’s Supercheap Auto Bathurst 1000 represents the best opportunity yet for The Bottle-O Racing entry to claim the The Great Race, according to team owner Rod Nash.

David Reynolds and Dean Canto have been contenders for the Mount Panorama classic for the last three years, most notably in 2012 when the pair finished a close second to Triple Eight’s Jamie Whincup and Paul Dumbrell.

Last year the duo were also in a strong position to win the race when a mechanical drama hit, ending their victory hopes.

Starting from pole position for today’s race, Reynolds and Canto appear to be in the strongest position yet, armed with the FG X Falcon which has dominated the season thus far.

Nash said a victory would prove to be a spacial one for the team following the horrific crash that ruled the Chaz Mostert/Cameron Waters Prodrive entry out of the race.

“Absolutely (this is our best chance), I don’t think we have been in a better position from The Bottle-O side,” Nash told Speedafe.com.

“If you ask what else could you wish for then there is nothing to wish for. Those two (David and Dean) and the engineer are just well oiled at this point in time.

“The cars as we know have been fast. Dave is currently third in the championship and when you line all that up the ducks are in a row and it is up to us now.

“You are in the hands of the gods, you need luck around here but certainly this is our best year of attack so we will give it everything we can.

“Chaz is a racer and it will be killing him (to be missing Bathurst). It is what it is. It would be a very nice finish to do it for him as well as the team.”

With rain expected to interrupt the race, Nash is confident his drivers will adapt to the changeable conditions after Reynolds’ impressive shootout run to pole in treacherous wet conditions.

“The cars were slipping and sliding around. Dave’s car was stepping out everywhere and he was just pulling the car along with that feel. That is where the drivers come into their own.

“I think on that demonstration alone if it did happen to rain he would be able to handle it and I’ve seen Dean in the rain he likes excitement. The two of them don’t seem to suffer from nervousness.”