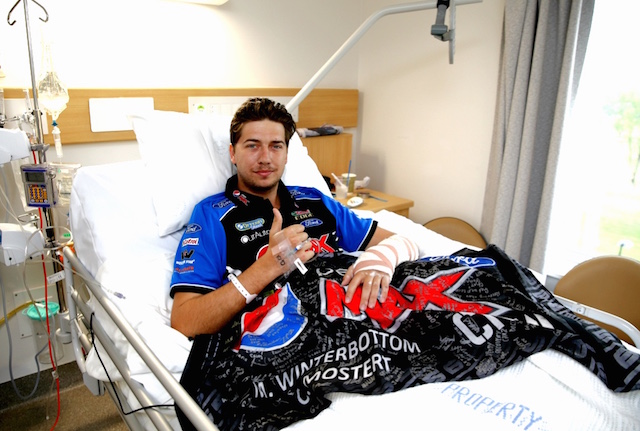 Chaz Mostert has spoken about the biggest accident of his career which has left him hospitalised and his season in tatters.

The Prodrive Racing Australia Ford driver was involved in a horrific crash in the run down to Forrest’s Elbow in Friday qualifying.

He has since had successful surgery to repair his broken left leg and fractured wrist.

“I was going down the hill and generally you follow your line using the black rubber marks,” the 23-year-old explained in a team statement.

“I was just a little bit out of sync but to be honest it wasn’t a ten-tenths lap, it was just a nine out of 10.

“I turned in a little bit early but it was all over pretty quickly after that. It was the biggest hit I’ve ever had in my career. I knew something was pretty wrong when I stopped.”

Mostert thanked fans for their support and the thousands of messages received on social media.

He singled out his highest praise for the circuit marshals caught up in the crash.

“The fan response has been just unbelievable. I am overwhelmed to be honest,” he said.

“It has given me a skip in my step and I get emotional thinking about all those people that have taken the time out to wish me well.

“But then I had a lot of very different emotions when I heard marshals had been hurt from my accident.

“I have met a couple of them here in the hospital but I will have to catch up with them and have some dinner and tell some stories when I am recovered a little more.”

Mostert is grateful that his injuries were not more severe as his Ford at one stage rode the concrete wall threatening to plunge down the mountain.

“From my point of view I am very lucky to be here with the relatively minimal injuries I’ve got,” he added.

“In those first minutes after a big crash you can feel pretty bad, pretty quickly, but the medical team reacted correctly and got on the scene quickly.

“It shows how lucky we are in V8 Supercars to have so many passionate people that know so much about the health side of things, so thanks so much to all of the crews that worked on me.”

Mostert, who was down to defend his Bathurst title with co-driver Cameron Waters, watched his team-mates David Reynolds and Dean Canto spear to pole position for the 1000km marathon.

“I don’t want to be in (the hospital); I’d rather be out racing with the boys and the girls,” he said.

“ I know that the team is in safe hands and we have a great chance of trying to win three in a row,” Mostert stated.

“Frosty (Mark Winterbottom) and Dave are on song, Andre (Heimgartner) is doing great for a young guy and I also think the girls are going to surprise a lot of people too.

“The FG X Falcon is represented well. It is just a shame car #6 won’t be out there this weekend.”