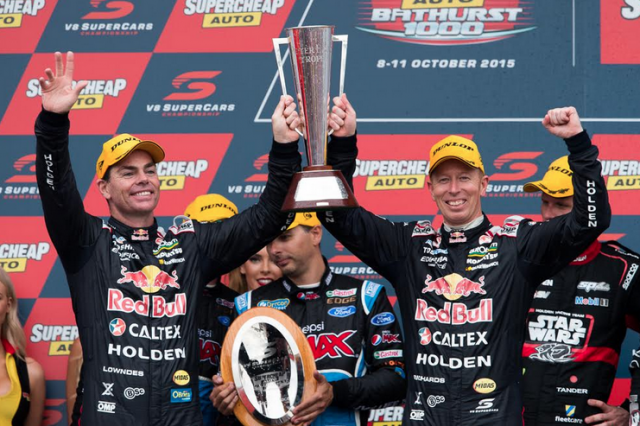 Lowndes vaulted ahead of David Reynolds and Mark Winterbottom with a shorter fuel fill in the final pitstop under the Safety Car before sprinting away to victory.

Winterbottom and Steve Owen recovered from early electrical issues and a mid-race penalty to finish second, marking another significant step in the former’s title bid.

Garth Tander made the most of some frantic battling on the final restart with 18 laps remaining to take third alongside his co-driver Warren Luff.

All three cars had started outside the top 10 following Saturday’s rain-hit qualifying.

The six-time champion overtook the Safety Car as he blazed around for another lap and was later forced to take a drive-through as a result.

Whincup and co-driver Dumbrell were the fastest combination for the majority of the day, with the former excelling during a brief rain shower mid-race.

The former managed to pull a 30 second lead over the field before losing track position when the team had to attend to a throttle position sensor issue at the next pitstop.

Reynolds was on course for second at the final restart before a dive-bomb from Coulthard shuffled the order; allowing Tander to carve through the pack.

Jason Bright and Andrew Jones were seventh after a late mistake from Shane van Gisbergen, who took the flag eighth.

Van Gisbergen and Jonathon Webb were among the front-runners until losing bulk track position stacking behind the DJR Team Penske Ford during the mid-race rush for wets.

DJRTP’s day ultimately came to a sorry end as Scott Pye caused the final yellow with a heavy crash at the top of the hill.

The South Australian managed to exit the car under his own power before being taken to the medical centre for further checks.

Fluid from the Volvo caught out Renee Gracie; the Supergirls Ford requiring significant front-end repairs after head-butting the tyre wall.

The result though was all about Lowndes, who took a sixth victory as well as moving clear at the top of the all-time Bathurst podium finishes tally with 13.

Richards meanwhile picked up his fourth victory, handing Holden its 30th win on the mountain in the process.