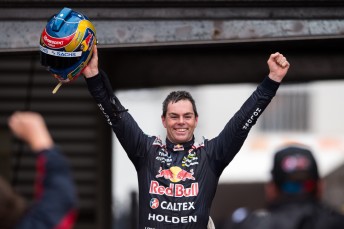 Craig Lowndes has downplayed the prospect of equalling Peter Brock’s Bathurst record of nine victories after scoring his sixth win in the Great Race.

The Red Bull Racing driver, partnered by Steven Richards, fought his way through the field from 15th on the grid to land his first Bathurst 1000 triumph since 2010.

Mentored in his early career by the late Brock, Lowndes has followed in Brock’s footsteps by making Bathurst success the hallmark of his racing success.

Lowndes’ latest triumph has seen him equal the victory records of Larry Perkins and Mark Skaife, but he feels matching Brock’s record of nine wins is unlikely.

“He (Peter Brock) was obviously instrumental in helping me when I first came to place and really it is a credit and an honour to have our names on that trophy.”

Lowndes’ sixth victory has however seen him claim a record for the most podium finishes in the Great Race with 13 in 21 starts.

The previous record of 12 was previously jointly held by Brock, Perkins, Jim Richards and Lowndes.

Boasting a remarkable record of 17 top 10 results from 19 finishes, the 41-year-old says it is a honour to hold the record.

Lowndes admitted that a mixture of his love for longer distance races, the Mount Panorama circuit and his career experiences are the key to his success at Bathurst.

“Records are records, it is an honour to say we are the all time holder of being on the podium,” added Lowndes.

“For me it just shows that we are consistent when we come to places like this. I love this style of racing and I love this track.

“Either I have made a mistake or the car has had a problem (at Bathurst when we are not on the podium).

“Generally if we are in the race from start to finish we are always in the hunt towards the end of the day.

“It does come back to a bit of nous and being smarter throughout the day to pick your opportunities.

“Today in the wet we struggled but I knew the track was going to dry out. I just let people by hoping that we could get them and we did.”