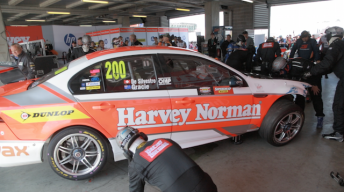 Renee Gracie was delivered a crushing blow to her maiden Supercheap Auto Bathurst 1000 campaign after slipping up on an oil spill.

The crew will repair heavy front right hand damage to the Ford which found the tyre barriers at Forrest’s Elbow on Lap 16 after Volvo driver David Wall dropped oil from his #34 S60.

Gracie had started the race from the pitlane in a strategic plan, topping up with a few litres of fuel after the warm-up lap.

The rookie had been clocking in 2:10s and assumed a comfortable groove before the crash.

Gutted, Gracie was teary as she was consoled by her crew including mentor and last year’s Bathurst winning co-driver Paul Morris.

“To be honest I thought it was radiator fluid because it was a bit shiny so sometimes you think that’s water,” Gracie explained.

“I couldn’t go left or right because there is no room over there and down the hill.”

Gracie said that she saw the flags and had slowed down in anticipation of the drama to come.

“I’m lucky they had the flags out otherwise our day would be well and truly over,” she said.

“If we were to be out of the race I didn’t think it would be because of stupid oil on the track.

“It’s pretty tough and I didn’t see our day going this way.”

Team-mate Simona de Silvestro said she is eager for the car to return to the fight so she can log some crucial race laps.

“I think she (Gracie) got caught a little bit off guard,” de Silvestro said.

“It’s always hard when you are the first car to the scene because you are not quite sure what to expect.”