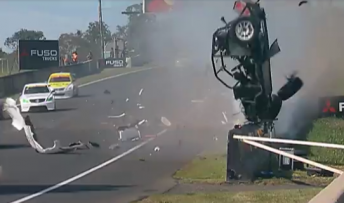 Aussie Racing Cars driver Damien Flack is expected to make a full recovery after suffering cracked ribs and a punctured lung in a horrific crash at Mount Panorama.

The Brisbane driver was airlifted to hospital when his vehicle encountered a series of frightening barrel rolls during Saturday’s race following contact with his brother Adrian Flack on the Conrod Straight.

The ferocity of the accident saw Flack’s car leap the concrete wall and catch fire once it came to rest.

Flack remains in hospital but the category has since confirmed that his condition has improved significantly.

Aussie Racing Cars category manager Brad Ward praised the work of the medical crews that treated Flack and is hopeful he will make a quick recovery.

“The safety of our drivers is our number one priority. We are very thankful of the efforts of the track medical staff and emergency response teams who assisted when the incident occurred,” said Ward.

“The crash occurred at the fastest part of the circuit and is one of the biggest we’ve ever seen in ARC history.  This is testament to the strength of the chassis and drivers safety cell which was unreached in the incident”.

“Together with the Aussie Racing Cars family, we wish Damien a quick recovery.”