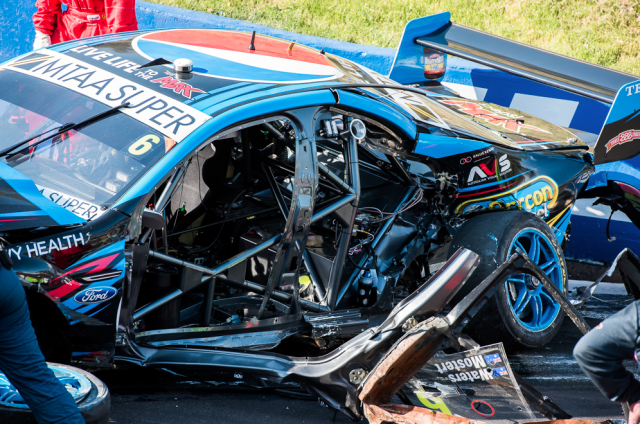 V8 Supercars will investigate Chaz Mostert’s horrific crash at the Supercheap Auto Bathurst 1000 as part of its ongoing quest to improve safety.

Mostert sustained a broken left leg and wrist when he misjudged the run into Forrest’s Elbow sparking a violent crash that forced the abandonment of qualifying.

Both injuries appeared to be sustained against the car’s gear lever as the Ford suffered two heavy hits against the concrete walls.

Three marshals were also injured in the crash which saw Mostert’s car hit an officials’ post as it rode the inside wall.

While initially happy with how the car stood up to the impact, V8 Supercars technical director David Stuart says it is important to investigate incidents to evaluate areas for improvement.

V8 Supercars and Prodrive will conduct a thorough investigation into the accident in the coming weeks.

“We can always learn something from what has happened and how to prevent other things happening in the future,” Stuart told Speedcafe.com.

“Here at the race track is not the best time to do that. But once they get the car back and are able to strip all the broken bits off of it, we will sit down and go through the data with them.

“We had a big incident with (James) Courtney and (Alex) Premat at Phillip Island a couple of years ago. This is another big incident and on first impression the car did a good job.

“Our primary thing is to look at the development of the car and the structural integrity of the car. The track side (safety) is for the clerk of the course and CAMS.”

While safety remains paramount, Red Bull Racing Australia boss Roland Dane agrees that it is important to learn from such incidents, but has warned against any knee-jerk reactions.

“There are always things to be learned from incidents small, big, whatever, you always try to learn something from them,” Dane told Speedcafe.com.

“We always look at every major incident with the cars to see if there is something better. We are doing that all the time.

Marshals’ safety has also been brought into question following the frightening incident which saw an officials post sustain heavy damage during the crash.

The 39-year-old also believes a consideration should be made to install a light warning system instead of traditional marshals posts at certain areas of the circuit.

“Today’s incident has probably highlighted a few things about potential track safety that might need to be addressed in the future,” Luff told Speedcafe.com.

“There are obviously those incidents which you can’t obviously account for but as we saw today a car nearly went over the wall and made contact with a marshals’ post.

“Something needs to be addressed with regards to the positioning of that particular marshal post in the future potentially.

“The way that technology is going, maybe in those areas where there is a potential risk to flag marshals posts they can have a relay point controlled with lights.

“The officials are an integral part of our sport. We couldn’t do what we do without them but most importantly the sport has to be safe for them as well.”