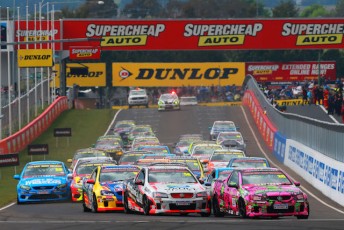 Rhys McNally holding out the field in the V8 Utes

Ryal Harris and Rhys McNally have each won races in Round Six of the East Coast Bullbars V8 Utes at Bathurst.

David Sieders made the best start from fourth on the grid and attempted to squeeze between front row starters Kris Walton and Kim Jane only for three-way contact to occur under brakes and through Hell Corner.

Miedecke in turn attracted attention from Walton, who made a final lap bump and run at Forrest’s Elbow which would see the Rentco-backed driver demoted from second to third post-race.

The penalty elevated Sieders to second, having followed Walton past Miedcke.

McNally started Race 2 from position one as a result of the top eight grid inversion, and held a comfortable lead for much of the partially wet journey.

Craig Dontas passed Nathan Pretty for second at the Cutting on Lap 1, Miedecke then getting alongside and amazingly staying there until finally making the pass at the Metal Grate.

Pretty eventually reclaimed the place, but lost it again as he attempted to get by Dontas at the Chase on the final lap.

His nearest title rival Adam Marjoram was ninth in both races, while neither Sieders nor Jane finished the second due to mechanical issues.

Race 3 completes the round from 8:55 (local time) tomorrow.

Brendon Pingel won the final race in Round Five of the Aussie Racing Cars, taking a season-first round win in the process.

Pingel headed the field out of the first corner, from Maurice Masini and a strong starting Darren Chamberlin.

The race would soon come under control of the safety car when Sam Milton and Craig Woods came together on the uphill run to Reid Park, making heavy contact with the wall.

More carnage transpired upon the restart on the fourth and final lap of the shortened affair when Chamberlin took out Adam Uebergang and Ben Walsh at Hell Corner, having lost his brakes.

Pingel lead Jon McCorkindale across the finish line, but the latter was subsequently relegated to fourth having jumped early at the restart, leaving Masini and Tony Quinn to fill the top three.

“I’m completely over the moon that we can survive Bathurst, number one, and number two, walk away with the win,” said Pingel, who extended his series lead.

“To be standing up there [on the Bathurst podium] is a dream for anyone who races in motorsport.”

Meanwhile, Damien Flack has been airlifted to Liverpool Hospital following his horrific crash during Race 2, a team official confirmed.

Flack’s car rolled several times down Conrod Straight and over the concrete wall, briefly catching fire as it came to rest in the infield after rear-end contact from brother Adrian.

Flack suffered broken ribs and a punctured lung, and has been joined by Adrian in hospital.

The Aussie Racing Cars continues with Round Six at Phillip Island from November 20 to 22.