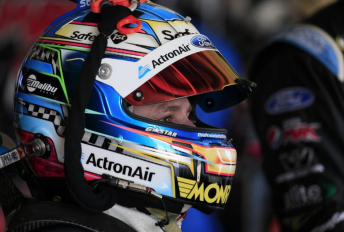 Championship contenders Mark Winterbottom and Craig Lowndes will be spectators for this afternoon’s Top 10 Shootout after a rain interrupted qualifying session.

Rescheduled and shortened to 30 minutes following Chaz Mostert’s crash in the first attempt at qualifying on Friday, the session began under threatening skies.

Drops of rain eventually came at the halfway mark and, with the track too damp to see any further improvements, several were left to rue errors on their early laps.

Fabian Coulthard made the best of the early going to record a 2:06.18s best, 0.26s clear of second placed man Shane van Gisbergen.

Tim Slade and Jamie Whincup made it a Holden sweep at the top of the order ahead of DJR Team Penske’s Scott Pye in the leading Ford.

Winterbottom will start 14th, one place ahead of Red Bull star Craig Lowndes.

With Mostert out for the weekend, Reynolds is the only driver from the championship’s top four who will start the heralded Bathurst Shootout.

“We rolled out and the first set (of tyres) was pretty bad on that first lap,” explained Winterbottom.

“We chose to come in and put another set of tyres on and I probably missed the window by about five seconds.

“When I went through the Cutting I was up by about 0.8s. I was on for a 2:05, but when the rain comes down you either stick it in the fence or count your losses.

“Fourteenth is alright, we’ll bounce back tomorrow, but the Shootout is the best part of Bathurst for me. I love it and we’ll be a spectator. It is what it is.”

Lowndes had also been on a quick lap when the first of the rain came down.

“I buggered up the first run and we knew there was potential for some showers coming through,” said Lowndes.

“You only have to make a couple of small mistakes around here (to ruin a lap).

“We bolted on the next set, went out and it started to sprinkle at Turn 2. I ran wide and just managed to keep it off the wall.

“We’ve got a bit of a cruisey afternoon now.”

Both Holden Racing Team cars were also down the order, with Jack Perkins 17th and Garth Tander 22nd.