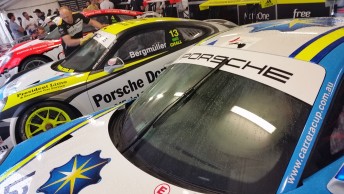 The cars were brought straight back to the Porsche area

The second race of the Carrera Cup at Mount Panorama has been abandoned after a heavy rain shower on what would have been the opening lap.

As the cars went out for their formation lap rain started to fall and Tag Heuer Carrera Challenge points leader Shane Smollen spun coming out of the cutting. Officials first of all made the call to start behind the Safety Car.

A number of drivers chose to pit and put on wet tyres, including multiple champion Craig Baird.

Then as the field rolled away behind the Safety Car the rain got much heavier. Those at the front, who were still on slicks, were having trouble staying with the Safety Car and then Matt Campbell spun at the kink in Conrod Straight; the same spot Jim Richards crashed in the wet in the GT-R Nissan in 1992.

The rain only got heavier and the red flag was waved.

Porsche Cars Australia Motorsport Manager Kurt Sakzewski was in full support of the decision to abandon the race and with it no points were allocated. It means that as long as tomorrow’s morning’s race is run, only two points scoring races will be awarded for championship positions.

The starting spots for the race set down for 9.25am will be the race results of yesterday’s opener, which was won by David Russell from Campbell.

VIDEO: Kurt Sakzewski speak about the second race at Bathurst