Mostert surgery delayed until this morning

Mostert surgery delayed until this morning 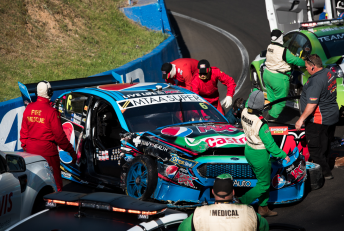 Chaz Mostert is undergoing surgery on his injuries this morning at the Orange Health Service Hospital.

The 23-year-old suffered a clean break to his left femur and a fractured left wrist in a horror qualifying crash at Bathurst on Friday.

Initially expected to have surgery last night, the procedures were delayed due to a more urgent case.

“Prodrive Racing (Australia) driver Chaz Mostert is undergoing surgery this morning for injuries sustained in a crash during Friday’s qualifying session for the Bathurst 1000,” read a Prodrive statement.

“Mostert’s surgery was delayed due to the Orange Health Service Hospital needing to attend to a more urgent case. Mostert was made comfortable and rested overnight.”

The extent of Mostert’s injury appears set to rule him out for the remainder of the season.

“There’s a significant force onto his femur there to snap it like that,” V8 Supercars medical delegate Dr Carl Le told Fox Sports.

“They’re going to put a rod into it to get it to heal in the right place, then as soon as they can they’ll get him to mobilise to make it heal as quick as possible.

“He won’t be back in the car this year, but I’m pretty confident that he should be right for Clipsal next year.”