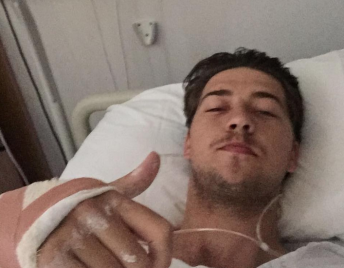 Chaz Mostert posted this picture to Facebook from his hospital bed

Chaz Mostert is following the Bathurst action from his Orange hospital bed after successful surgery on his injuries.

Prodrive Racing Australia has confirmed that today’s surgery was a success, with a pin inserted to reattach his broken left femur.

“Mostert is resting after several hours in surgery earlier today. He had a pin inserted in his broken left femur and has also had a cast applied to his fractured left wrist.”

Mostert expressed his support for his Prodrive team-mates via social media, offering an apology to co-driver Cameron Waters, who was left to focus on his Dunlop Series duties after the crash.

“To all my family, friends, awesome fans, officials, volunteers and medical team I’m on the mend and over the moon with the support,” wrote Mostert.

“I had an operation this morning for my leg, all is well and I’m on the mend.

“Good luck guys and so sorry to my boy Cam Waters for taking him out of the big race this year, but get them in this DVS race.”

Mostert is set to miss the remainder of the V8 Supercars season due to his injuries, with Waters poised to take over the #6 seat for the final three events.

Who will partner Waters at the Castrol Gold Coast 600 in two weeks time remains unclear, however, with the team hopeful of finalising plans before the weekend is out.

Among the obvious candidates is Steven Johnson, who confirmed to circuit television at Bathurst that he has made contact with the Ford squad.

“I’m quite good mates with Chaz,” he said.

“I know him from two years ago racing in our team and I wish him all the best, but we’ll see what happens.”