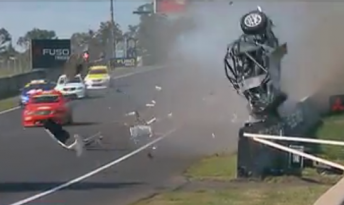 The second Aussie Racing Car Series heat of the weekend at Bathurst has been abandoned following a horrific crash for Damien Flack on Conrod Straight.

Flack was conscious after the crash and has been taken to the circuit’s medical centre for further assessment.

A member of the driver’s team told Speedcafe.com that Flack has sustained broken ribs and a punctured lung in the crash.

The Brisbane-based Flack was tapped from behind by brother Adrian on Conrod during the third lap, sending his Euro GT-bodied car into a spin.

Flack’s machine began to flip as it spun, hitting the left-side concrete wall roof-first before commencing a series of barrel rolls.

The car eventually rolled over the fence, briefly catching fire after coming to rest in the infield grass.

The race was immediately red flagged and subsequently abandoned.

“The driver is conscious, alert, and talking to the medical team,” ARC category management told Speedcafe.com. 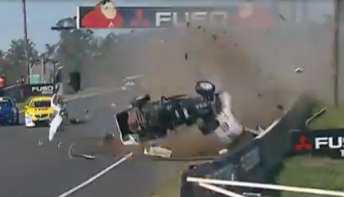 Bodywork flew from the car as it rolled

Tony Quinn, who is making a cameo in the series this weekend, said the accident highlighted the safety integrity of the cars.

“I was right behind it and I saw the car do at least four tumbles,” Quinn told Speedcafe.com.

“It then did some more before it went over the wall and caught fire. The car is pretty good to be honest.

“That was at top speed and it was violent. The cars are very strong and very safe.”

Next Story Coulthard returns to the top in final practice