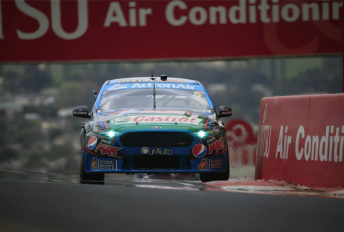 With Mostert seemingly set to miss the balance of the season after breaking his left femur and wrist, Winterbottom has been given an unexpected break in the points chase.

Winterbottom is currently 198 points ahead of Mostert but enjoys a healthy 360 point advantage over third placed man David Reynolds.

“We had three in the fight (PRA) and now we’ve got two.

“He (Chaz) was my next closest rival but you are confident that you can beat him.

“Having said that it would be have been a good battle.”

Reynolds, who will start today’s Supercheap Auto Bathurst 1000 from pole with Winterbottom in 14th, is now effectively the closest by default in the points to the championship leader.

“It was obviously very unfortunate with Chaz yesterday,” Reynolds said.

When quizzed by Speedcafe.com about considering whether he is now reassessing his championship stocks going into the 1000km marathon, Reynolds remained conservative.

“It does but I think he (Winterbottom) is so far in front that he has to have a DNF or two for me to catch up,” Reynolds said.

“I’m going there to try and win the race.”

Winterbottom starts 14th in today’s race, one place ahead of Craig Lowndes, who is Prodrive’s closest threat for the title aboard his Red Bull Holden.