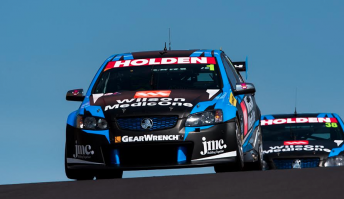 Held under dark skies, the Eggleston Holden driver was rarely threatened as he controlled the race throughout, surviving three safety car periods and a late rain shower on his way to victory.

Series leader Cameron Waters managed to secure second after coming through a titanic scrap with the impressive Chris Pither, who charged from the rear of the grid, in third.

Waters had shadowed the charging Dumbrell before he became locked in a squabble with Pither for second spot in the final third of the race.

Pither, who rose through the field courtesy of smart two-stop strategy, barged past Waters on the run to The Chase, but slippery conditions provided by a late rain shower saw the positions reversed by the flag.

Andrew Jones confirmed his strong pace throughout the weekend as he brought the repaired #8 Brad Jones Racing Holden home in fourth.

Jones also made use of a two stop strategy to rise up through the field.

Todd Hazelwood enjoyed a solid drive throughout to come home in fifth ahead of Paul Morris and Garry Rogers Motorsport’s James Golding.

Macauley Jones secured eighth, Jack Le Brocq, who ran as high as third in the early laps, finished ninth, with Garry Jacobson rounding out the top 10.

Liam McAdam impressed on his Dunlop Series debut to come home in 11th position in his Eggleston Motorsport Commodore.

The race was halted after five laps when Shae Davies made contact with Grant Denyer, forcing the the latter into the gravel trap at Hell Corner.

Matt Chahda was unable to avoid the incident resulting in him beaching his car in the gravel trap.

Denyer rejoined the race but he suffered a left rear puncture which required an early stop. He would eventually reach the chequered flag in 13th position.

Chahda caused the second Safety Car when his car stopped on Conrod Straight, while an off for Ant Pederson at The Chase saw the full course yellows deployed for a third time.

Josh Kean’s race ended prematurely when he suffered damage to his Brad Jones Racing Commodore after a second brush with the wall at McPhillamy Park.

Dumbrell’s victory ensures the Dunlop Series title fight will go down to the wire at Sydney Olympic Park.