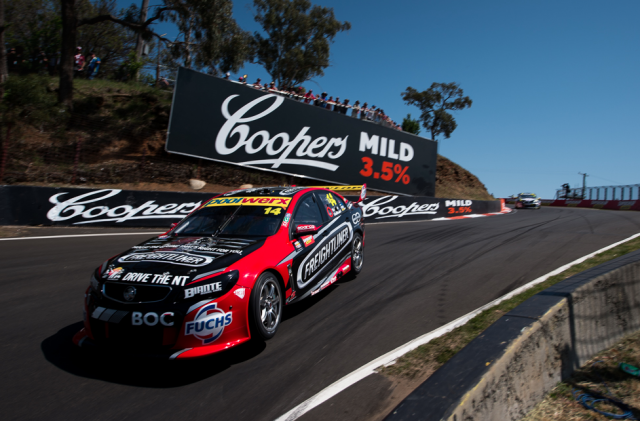 Fabian Coulthard has topped the final practice session ahead of the rescheduled qualifying at the Supercheap Auto Bathurst 1000.

Teams took notably different approaches to the session, with Friday’s 2:04.9s record setter Jamie Whincup among those to forgo another qualifying simulation in favour of focussing on race runs.

Coulthard proved the best of those to go for a late flyer, recording 2:05.21s despite coming across the Erebus Mercedes of Jack Le Brocq on the exit of The Chase.

“I’m not sure who was in the car but I was flashing my lights down Conrod to try and get them out of the way,” said Coulthard, who had recorded a new practice record on Thursday before Whincup’s Practice 5 effort.

“Obviously they were trying to do their lap at the same time. To be compromised a little bit… I want that lap record back so I was trying pretty hard.”

“It’s a bit different for a Bathurst Saturday, we were doing race runs and then focussing on qualifying,” he said.

“The car isn’t too bad. It’s sketchy in a few spots but competitive in others. We’ll have a good crack at pole and if we’re good enough, we’ll get it.

“It’s been a tough couple of days for our team but if we can put it on pole that’ll cheer everyone up.”

Scott Pye ran an early mock qualifying run, sitting atop the order for the majority of the going after setting a 2:05.51s.

Pye then handed the DJR Team Penske Ford to co-driver Marcos Ambrose to complete the remainder of the 40 minutes.

Lee Holdsworth made minor right-front contact with the wall at Hell Corner during the session after coming across Ash Walsh’s spun Mercedes.

The #18 Holden soon returned to the circuit after being inspected for damage, with co-driver Sebastien Bourdais clocking more important laps before Sunday’s race.

A 30 minute qualifying is scheduled for 1230 local time.