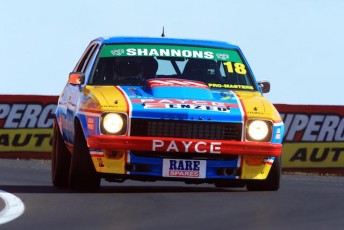 John Bowe on his way to winning the second TCM race

John Bowe lead home Steven Johnson in Race 2 of the TCM Mountain Masters round at Bathurst.

Bowe braked late at Hell Corner to sweep into the lead from the rolling start and was never headed, despite the threat of Johnson’s more powerful Ford Mustang down Conrod Straight.

The XB Falcon driver looked set to challenge Johnson until the safety car was called on Lap 4 when Paul Freestone ran off and could not extricate himself from the Murray’s Corner gravel trap.

One lap remained when the race went green again, during which both Bowe and Johnson broke the latter’s lap record set in Race 1.

Brett Youlden made a play for third on the final lap but ran wide at Griffins, consequently failing to complete the move, instead finishing in fourth.

Jim Richards rounded out the top five, while Glenn Seton made seventh from 12th on the grid after being turned around by Andrew Miedecke in Race 1.

Miedecke did not take the start.

Bowe’s win squares the Round Seven ledger after he trailed Johnson home in the opening race, with Race 3 to settle matters from 750am local time tomorrow.