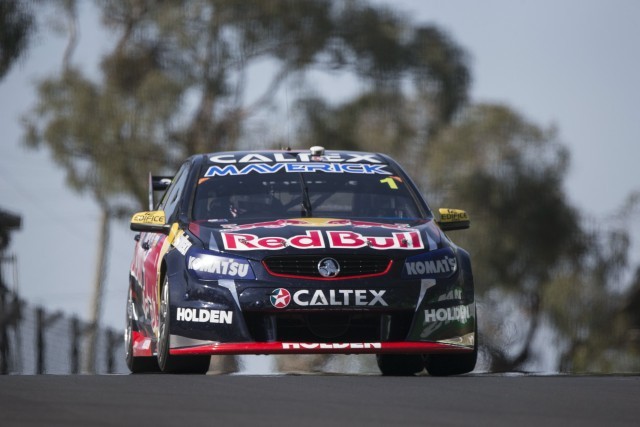 Jamie Whincup became the first V8 Supercars driver to lap Mount Panorama in the 2:04s bracket ahead of this afternoon’s qualifying.

The Red Bull Holden’s time came as the chequered flag waved on the 45 minute fifth practice session of the weekend.

“We’re just going about our job trying to make the buggy as quick as possible,” said Whincup after his lap.

“We won’t get too carried away with practice, obviously it’s a cool number to come up on the dash, but no doubt there’s going to be big improvements for qualy later on this afternoon.

“There’s plenty of temp at the moment that should cool down over the weekend. It’s all about having the right car at the right time and the engineers did a pretty good job then.”

Although encouraged by his own team’s progress, Pye could only pay respect to Whincup for his efforts.

“We’ve worked on the car over the weekend and made some changes that have worked well,” he said.

“I was pumped to do a 5.2, but full respect to Jamie. It’s a balls-out track and he put his balls to the wall that’s for sure.”

The primary drivers undertook the bulk of the running in the session as they worked on set-ups ahead of qualifying.

The session ran green for its duration despite early trouble for Tim Blanchard – whose car suffered electrical problems – and Andre Heimgartner, who visited the gravel at Murray’s Corner.

Qualifying will take place from 1550 this afternoon, with a Top 10 Shootout to follow tomorrow evening.