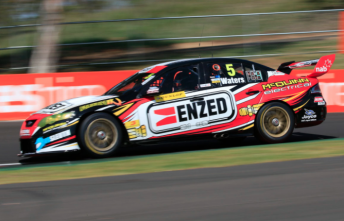 Cameron Waters returned to the top of the Dunlop Series field with an impressive display in an interrupted final practice session at Mount Panorama.

The Prodrive Racing Australia driver, who topped the earlier V8 Supercars co-driver session, continued his form into the Dunlop Series with the series leader posting a 2:07.0s to top the times.

Waters had traded times with Paul Dumbrell early on before lighting up the timing screens late on.

“We struggled a bit with the Dunlop Series car yesterday but we changed a few things overnight so I’m stoked to top the session,” said Waters.

However, the Ice Break Racing driver ended the session on a negative note when he lost control of his Falcon at The Dipper resulting in heavy contact with the wall.

The crash happened just seconds before the chequered flag.

While Dumbrell started strongly, the Eggleston Motorsport driver caused one of two red flag periods when he ran wide at Hell Corner, which left his Commodore stranded in the gravel trap.

Dumbrell rejoined the session with minutes to spare but he was unable to improve his time which left him in fourth spot.

It proved to be a difficult session for Ant Pedersen as mechanical dramas saw him come to a halt on the pit straight midway through session.

The initial incident occurred just as Dumbrell suffered his off prompting the red flags.

Pedersen rejoined the session only to suffer a similar issue that saw him stop on the Conrod Straight.

Josh Kean caused the first red flag of the session after 15 minutes when he misjudged the entry to The Chase which saw his Brad Jones Racing entry beached in the gravel trap.

Qualifying for the Dunlop Series is due to begin at 1500 local time.