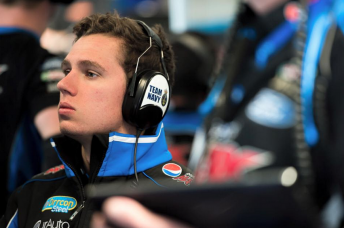 A dejected Cameron Waters has been left to focus on his Dunlop Series duties at Bathurst after Chaz Mostert’s heavy crash in qualifying for the Great Race.

The #6 Prodrive Ford has been withdrawn from the event following Mostert’s accident, which broke the driver’s left leg and wrist and destroyed the car.

Mostert and new-for-2015 co-driver Waters were among the hot favourites for both pole position and the race win.

The 21-year-old Waters has three prior Bathurst starts to his name, but was preparing for the biggest opportunity of his career alongside the reigning Great Race winner.

“The main thing is that he’s ok,” Waters told Speedcafe.com after visiting Mostert at the circuit’s medical centre.

“It was a massive shunt so I went down there (the medical centre) to speak to him before he went to the hospital.

“Any shunt like that is pretty scary when you see it on the screens. You’re just standing there and there’s nothing you can do about it.

“I’ve spoken to the guys and obviously we’re all gutted about it. But you don’t really care about (being out for) the weekend when something like that happens.”

Waters will tomorrow line up second for the 250km Dunlop Series race in Prodrive’s Enzed Ford.

The Mildura native currently leads the second-tier series and could seal the title if his nearest rivals strike trouble.

“It is what is it, I’ll just get in the car and see how I go,” he said of returning to the track tomorrow.

“I don’t really know how I’ll feel, but the main thing is that Chaz is ok. We’ll just go and press on and do our best.”