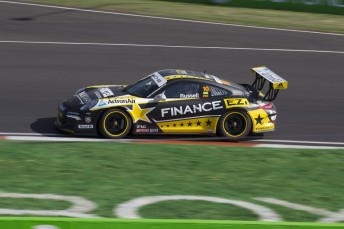 Russell took his first win of 2015 in the Carrera Cup

David Russell has taken advantage of a re-start to win the opening race of the Carrera Cup at Mount Panorama.

After pole-sitter Matt Campbell streaked away from the start, a mid-race safety car bunched the field after James Bergmuller and then Scott Taylor went off at the Chase on lap #4 of #10.

The re-start on lap #7 saw Campbell run wide at Hell Corner and Russell out dragged him up Mountain Straight.

A similar move was done by championship leader Nick Foster who moved to third ahead of defending champion Steven Richards.

Campbell tried to fight back in the close stages, but Russell was unfazed and took his first race win of the year in the Porsche series.

After smashing his 911 in qualifying, Shane Smollen repaid his crew with victory in the Tag Heuer Carrera Challenge from Tony Bates and Stephen Grove.

Race #2 of the Carrera Cup at Bathurst will be tomorrow at 4.25pm.