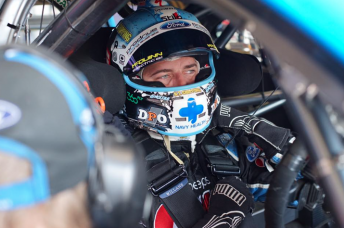 Reigning race winner Chaz Mostert has been rated as the favourite by bookmakers to take pole position for the Supercheap Auto Bathurst 1000.

Despite slipping down the order in final practice to 18th, Mostert and co-driver Cameron Waters are the $4.00 favourites to take pole.

Mostert secured a shock win in the Great Race last year when he and co-driver Paul Morris came from last position.

Jamie Whincup stormed to the top of Practice 5 with a blistering 2:04.90s lap, the first sub 2:05s V8 Supercar lap around the 6.2km circuit.

Whincup and co-driver Paul Dumbrell are on the second line of betting at $4.50 for pole which will be decided by Saturday’s top 10 shootout.

There has been support for the Harvey Norman Supergirls entry at $1001 with sportsbet.com.au saying the Simona de Silvestro/Renee Gracie Ford has attracted more bets than Jason Bright/Andrew Jones ($67), Rick Kelly/David Russell ($151) and Todd Kelly/Alex Buncombe ($201).

Gracie and de Silvestro have also been strongly supported to make the podium at odds of $126.

“The fight for the top step of the podium looks like it will be a battle between Whincup, Winterbottom, Mostert and Lowndes (co-driver Steve Richards), but all eyes will be on Renee Gracie and Simona de Silvestro with punters confident they can upstage the men on Australia’s most famous mountain,” sportsbet.com.au’s Ben Bulmer said.

Qualifying Odds (pays on winner of the Top 10 shootout)