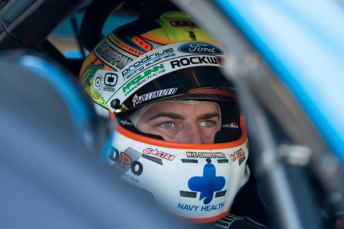 Chaz Mostert is undergoing surgery on injuries sustained in an horrific qualifying accident at the Supercheap Auto Bathurst 1000.

Mostert was airlifted to Orange Hospital with a broken left leg and wrist as a result of a violent high speed crash with the concrete wall on the run to Forrest’s Elbow.

X-Rays have since confirmed that Mostert has suffered a clean break of his left femur with the Prodrive Racing star due to undergo surgery.

Three marshals were also injured in the crash. Two were treated for minor injuries at the Mount Panorama circuit’s medical centre.

A third was taken to hospital in a stable condition but has since been cleared of neck, chest and brain injuries.

Mostert, who is in good spirits, has released a statement thanking medical teams for their support.

The reigning Bathurst 1000 winner was also pleased to hear that nobody was seriously hurt in the incident.

“I just want to say thanks to everyone in the V8 Supercars medical team for their care following my accident today,” said Mostert.

“My biggest fear was for the safety of the marshals but to hear none were seriously injured is a big relief.

“I’m really sorry for the team as it was my error that put us out and also destroyed a car.

“I just lost my racing line due to a bit of sun glare and glanced the wall.

“From there I was a passenger and took some pretty big hits.

“I’ve obviously got a bit of recovery to come but for now I want to wish the team all the best and see Frosty, Dave, Andre and the rest of the team go for the win on Sunday.”