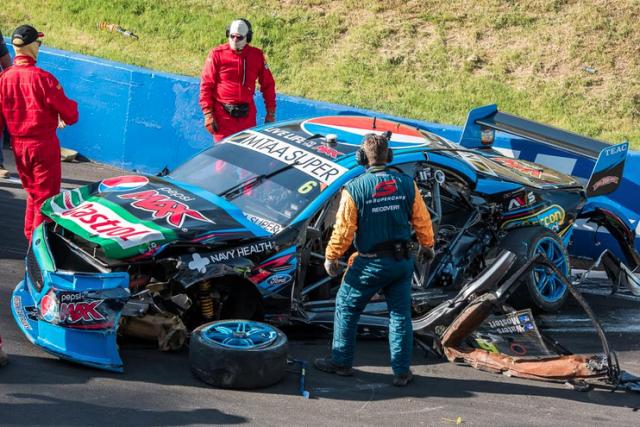 Prodrive team principal Tim Edwards says that driver Chaz Mostert is ‘in good spirits’ despite sustaining injuries in a heavy crash at Bathurst.

Mostert’s hopes of defending his Bathurst trophy and challenging team-mate Mark Winterbottom for the championship were dashed when he misjudged the run to Forrest’s Elbow on his opening lap of qualifying. 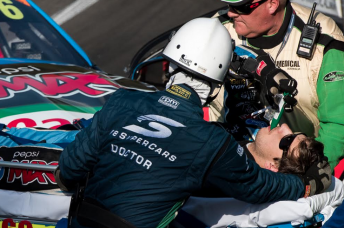 Chaz Mostert after being extracted from the car

The 23-year-old was airlifted to nearby Orange Hospital with a broken left femur and wrist following the accident.

Although upset for his team, Mostert joked with Edwards that “it was good job we signed that contract a couple of months ago” when the pair came face-to-face in the circuit’s medical centre.

“He’s in good spirits and already making light-hearted jokes, although a bit of that might have been influenced by the medication,” Edwards told Speedcafe.com.

“He’s very banged up but he’s in good spirits and just upset about letting the team down, which is ridiculous, because everyone here is thinking about him, not the damage.

“I just tried to reassure him that it’s irrelevant. Bones will heal and new cars will arrive.”

Edwards was yet to inspect the car when speaking to Speedcafe.com in the paddock this evening, with the damage to be investigated by V8 Supercars.

“We don’t know any more than what was on TV,” he said. “We just saw him clip the inside wall and go in.”

Edwards says that the team will have a clearer idea of when Mostert will be able to return to action once surgeries take place on his injuries.

Prodrive has co-driver Cameron Waters waiting in the wings to take over the entry if needed, but must first find another pilot to join Waters at the Castrol Gold Coast 600 in two weeks time.

“The process has already started as you’d expect,” said Edwards.

“First we will need to concentrate on what we need to do for the Gold Coast.

“In the next two to three days, once we know more about Chaz’s condition, we’ll have a plan of what we’re doing for the rest of the year.

“I’m no doctor, but I know from my own experience with my son (who had a motorcross accident last year) that there’s multiple different ways that they can deal with breaks.

“Plates, rods, external fixations. Depending on which one of those they end up doing, it obviously has x-amount of healing time.

“I’ve seen motorcross riders riding within days from having plates and rods put in their legs. It just depends on what they do.”

The ITM 400 Auckland is scheduled for two weeks after the Gold Coast, before events at Phillip Island and Sydney Olympic Park round out the season.