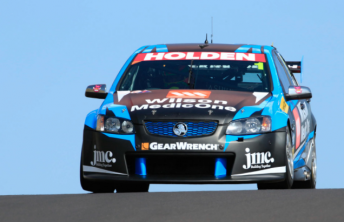 The Eggleston Motorsport driver fired in a 2:07.06 on his fourth lap which proved enough to hold on to pole position from a charging Cameron Waters.

The session was brought to a halt on two occasions with the second red flag period caused by a huge crash for Andrew Jones at The Esses.

The Brad Jones Racing driver lost control over the crest which resulted in a heavy front impact with the tyre barriers. 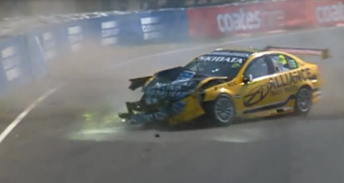 The remains of Andrew Jones’ car

Luckily Jones, who was lying fourth at the time, was able to walk away from the several damaged Commodore, which the team hope to repair for the race.

“Maybe it looks worse than it was,” said Andrew Jones.

“I feel for everyone at the team because we wanted pole and I through we were close to that.

“I was pretty committed but I just lost the rear and I couldn’t correct it, hopefully we can get out for tomorrow.”

An off for Aaron McGill at The Chase brought the red flags out early in the session without posting a time.

Meanwhile, Chris Pither will be forced to start from the rear of the grid after being forced to sit out qualifying due to the damage suffered in a crash at The Dipper during Practice 2.

“It is definitely disappointing to miss qualifying as the Ice Break Racing car had pace,” said Pither.

“I was just trying a bit too hard and and got caught out by some dirt and dust at The Dipper.

“The car has got good pace but starting from the back will be tough but fun. Hopefully we can make up some positions.”