Co-drivers into the 2:05s in morning practice

Co-drivers into the 2:05s in morning practice 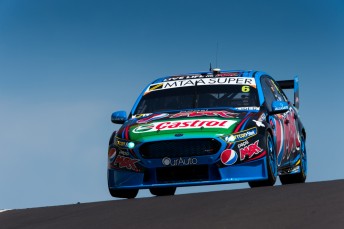 Driving Chaz Mostert’s Pepsi Max Ford, Waters put down the session’s best of 2:05.77s with three of the 45 minutes remaining.

Coulthard’s own co-driver Youlden was the only other man into the 2:05s, falling just 0.1s shy of Waters with his final lap.

The times heighten expectations of further records later today when the primary drivers return to the cars.

“It’s absolutely amazing to be in the 5s,” beamed Waters, who also continues his Dunlop Series duties this weekend.

“I came here aiming to be in the 6s and to do a 5 is unreal. I’m really happy with the car and we’re really looking good for the weekend.”

The Holden Racing Team’s Russell Ingall was third fastest ahead of Red Bull’s Paul Dumbrell, who jumped up from 25th on his final lap.

Marcos Ambrose ended up fifth after spending a significant portion of the session atop the sheets thanks to a 2:06.4s best.

“I’m really proud of the team here,” he said. “We haven’t had tyres yet and I probably won’t get them until the race. But I’m really excited about our form and really comfortable.”

Practice 4 was devoid of any major dramas, although several drivers endured harmless offs through The Chase.

Among them was Steven Richards, who ended up 12th after a mistake on his best set of tyres.

A fifth practice session will take place later today ahead of qualifying.