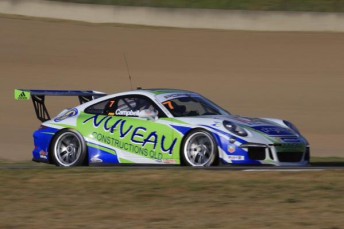 Matt Campbell has destroyed the Carrera Cup qualifying record by over two seconds during a lightning session in the morning at Mount Panorama.

Campbell, who yesterday bettered the practice lap record yesterday, was fast out of the blocks as he took his second straight pole award after being the fast man at Sandown.

He will start on the front row with David Russell, while championship front runners Steven Richards and Nick Foster will share the second row.

The session was stopped midway through when Tag Heuer Carrera Challenge points leader Shane Smollen crashed coming down the mountain after Skyline.

Despite that crash he was still quickest of the semi-pro racers.

The first race of the Carrera Cup will be at 2:15pm