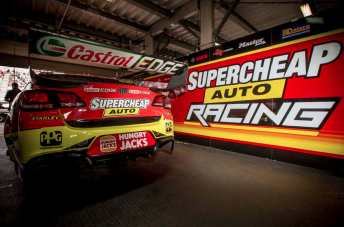 Walkinshaw Racing is searching for new backing for its third entry

Walkinshaw Racing managing director Adrian Burgess says that his team is committed to continuing as a four-car squad next year, quashing speculation that it will downsize.

The future of its #47 Racing Entitlements Contract has been under question over recent months, with sponsor Supercheap Auto and driver Tim Slade both set to move on.

Uncertainty surrounding Walkinshaw’s commitment to its third car had also brought speculation over the viability of Charlie Schwerkolt’s #18 REC, which runs as a customer entry alongside the Supercheap Holden.

Burgess and Schwerkolt both told Speedcafe.com in the paddock at Bathurst that the two RECs will be entered by next week’s deadline and ‘absolutely’ be run in-house by the team next year.

While the following season’s entry deadline for RECs is traditionally December 1, the date has been brought forward to October 16 this year, forcing teams to commit to the championship earlier.

“It will be entered, 100 percent,” Burgess told Speedcafe.com of the #47 REC, despite the lack of currently confirmed sponsorship.

“There is absolutely no doubt that we’ll be running four cars next year.

“Sponsors move up and down the paddock, people from other teams come chasing them all the time. It’s part of the game.

“The plan has always been four cars and we’re a fair way down the track with other businesses and parties to run that car. We’re closer to having it sorted than not.

“There’s plenty of good drivers still out there looking for a seat, so I’m more than happy we’ll put a decent package together.”

Tim Slade is thought to be a contender for one of the unconfirmed seats at Brad Jones Racing, which is set to lose Fabian Coulthard to DJR Team Penske, while Supercheap is reportedly destined for Prodrive.

Just who will replace Slade at Walkinshaw remains unclear, with several drivers still searching for a home.

Among the potential candidates is James Moffat, whose future at Nissan Motorsport is far from certain as the Kelly owned team also continues to chase funding.

Schwerkolt meanwhile has current driver Lee Holdsworth contracted for next season and insists he never seriously thought about backing away from his two-year Walkinshaw agreement.

Currently the only majority owner of an REC without equity in a race team, Schwerkolt moved from Prodrive to Walkinshaw this season.

He replaced James Rosenberg, who handed his REC back to V8 Supercars after failing to find the full budget to continue at Walkinshaws with his driver Nick Percat.

Although unable to secure a full-season primary sponsor, Schwerkolt managed to strike a three-event deal with Preston Hire for the Pirtek Enduro Cup and says he already has another backer locked in for the remaining events.

“It’s the hardest thing I’ve ever been involved in during my life, but getting results is what it’s about and we’re starting to get there with Lee,” Schwerkolt told Speedcafe.com of his future in V8 Supercars.

“The sport can be very rewarding and I feel like we’re not that far away from a podium or a win, which could even be this weekend.

“I’m unbelievably competitive and V8 Supercars really energises me. To get up there again is what it’s all about.

“It’s also great for my company Waverley Forklifts corporately. It’s a big part of my life now. I never thought about backing out of this after one year.”

Walkinshaw Racing confirmed on Wednesday that star driver James Courtney will remain on the sidelines this weekend, leaving Russell Ingall to co-drive with Jack Perkins.