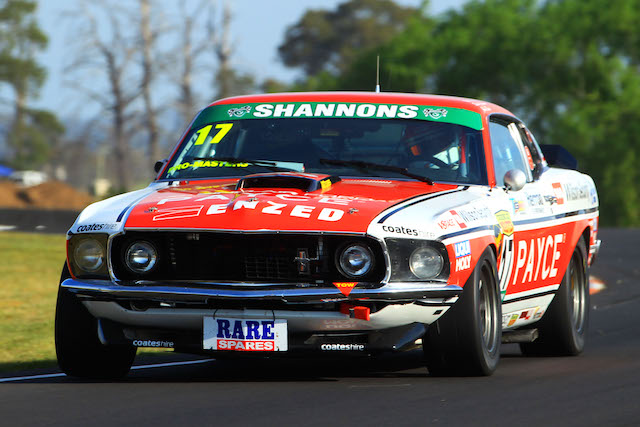 Steven Johnson has smashed the qualifying record on his way to claiming pole position for the penultimate Enzed Touring Car Masters round at Mount Panorama.

Johnson laid down a 2:18.16s on just his second timed lap of the session, nearly a full second inside the benchmark time which John Bowe set last year.

Ironically, Johnson did so in the same 1969 Ford Mustang which car owner Bowe drove 12 months ago, before pitting next lap and sitting out the back half of the 20 minute session.

Glenn Seton was over 1.1s adrift as he edged Andrew Miedecke and Eddie Abelnica respectively in a far tighter battle for second on the grid.

Kris Walton set the pace in practice for Round Six of the East Coast Bullbars V8 Utes.

Needing a strong performance this weekend to invigorate his title defence, Walton was the only man to lap in the 2:31s bracket across either session.

The bulk of the field set their personal bests during the morning’s opening session, with George Miedecke next-best from Ryan Hansford, and Nathan Pretty.

Last year’s Bathurst round winner Rhys NcNally was fifth fastest on his return to the series, with series leader Ryal Harris sixth.

Both sessions ran without interruption despite a heart-stopping lose for Hansford early in Practice 2.

The Multispares-backed driver got loose turning in for the Esses, over-corrected, and just managed to keep off the wall as he slid backwards.

The 2013 series champion moved into top spot after the chequered flag, setting the only lap time in the 2:32s.

“I was actually a bit surprised,” Masini revealed, “because I knew I wasn’t fastest for most of the session and then on the last lap I managed to get a good tow which got me up there.”

Masini’s tow came from Brendon Pingel and helped him to a time nearly half a second faster than James Abela, who earned the other front-row berth.

Series leader Pingel and Adrian Flack will share the second row, ahead of Tony Quinn and practice pace-setter Damien Flack.