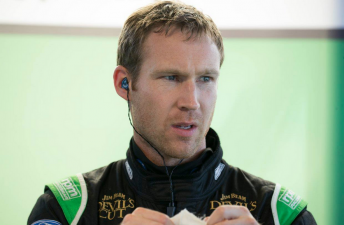 David Reynolds has been fined $25,000 for a ‘disgraceful’ comment about the Supergirls wildcard entry at Bathurst.

Reynolds referred to the Simona de Silvestro/Renee Gracie entry as the ‘pussy wagon’ during the post-practice press conference.

De Silvestro and Gracie are the first all-female combination at Bathurst since 1998, running as a one-off entry put together in part by V8 Supercars.

The wildcard is being run by as part of a five-car effort from Prodrive, which also prepares Reynolds’ The Bottle-O-backed Ford.

“Reynolds’ comments were disgraceful and completely unacceptable in our sport and he has been fined $25,000,” Warburton said.

“Women are an integral part of our sport, whether they are fans, drivers or team members. And V8 Supercars will continue to support and promote female participation at all levels of our sport.”

Reynolds followed up his initial comment in the press conference by expressing enthusiasm for having the wildcard in the field.

Prodrive has subsequently issued a statement from Reynolds apologising for the comment.