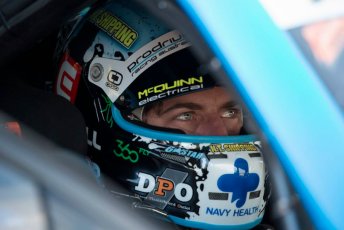 Chaz Mostert put his Prodrive Ford a full second quicker than his nearest rival in opening practice for the Supercheap Auto Bathurst 1000.

Run in cool and sunny conditions, Mostert and team-mate David Reynolds traded the top spot for much of the 45 minutes.

While Reynolds pitted for co-driver Dean Canto in the closing stages, Mostert went out for a last run, clocking an impressive 2:06.3s best.

The time was 1.7s quicker than Mostert recorded to top opening practice on the mountain last year.

“I felt really comfortable out there then, it felt fast across the top,” he smiled post-session.

“Last year here we were all nervous when we rolled out and none of the drivers wanted to get back in. This year the set-up we’ve rolled out with is really close.”

The Reynolds/Canto Ford remained second fastest at the flag ahead of Shane van Gisbergen, who improved to 2:07.41s in the final seconds.

James Moffat ended up as the quickest of the Altimas in fourth, with Todd and Rick Kelly sixth and eighth respectively.

Tander spun harmlessly into the gravel during the opening 10 minutes, while Blanchard damaged the right-front of his Holden against the right-side concrete with an off of his own following the restart.

Those to rejoin unscathed from hairy moments included Craig Lowndes, who was lucky not to be collected by Tim Slade when he looped his Red Bull Holden at The Chase.

While Mostert’s overall lap time was surprisingly fast, the driver reported that he did not break the 300km/h on Conrod.

“I think you’ll see the speed difference more in slip streams and stuff like that. I didn’t really get any tows out there then to see if I could crack the 300km/h mark,” said Mostert.

“I’m sure it’ll happen at some time over the weekend, provided we get good wind conditions as well.

“The ratio feels a bit different in different places, it’s a little bit boggier in some corners but I think overall it’s not a big change.”

Dean Canto, Alex Premat, Steve Owen, Marcos Ambrose and Sebastien Bourdais were the only part-timers to cut laps, with the day’s second session dedicated to the co-drivers.

De Silvestro ended up 5.3s from the pace, describing the circuit as “crazy”.

“The first time you get on the hill you are like ‘oh my god it really goes down there’,” she beamed.

“For me everything is so new. I think it was ok but now I will look at the data and get quicker. I’m really happy with the first session.”