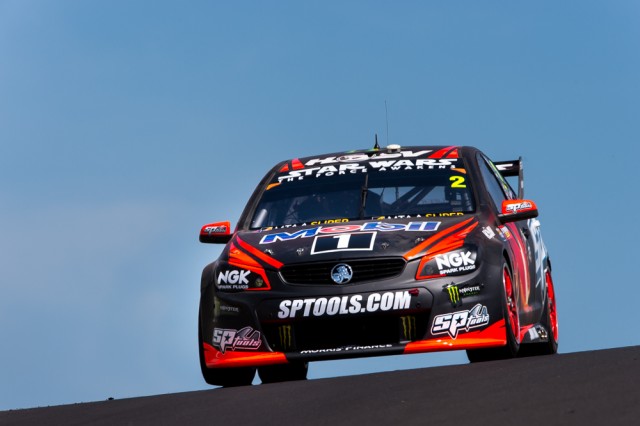 Warren Luff recorded the fastest time in co-driver practice for the Supercheap Auto Bathurst 1000 as Mount Panorama claimed its first major scalp of the weekend.

David Russell heavily damaged Rick Kelly’s Nissan with a mid-session clout of the wall at The Cutting.

The Brisbane-based driver lost the rear of the Jack Daniel’s Altima through the double-apex left-hander before making heavy right-side contact with the concrete.

“It’s not what you want, you want his confidence to be nice and high, but it’s only Thursday,” shrugged Kelly after watching the incident unfold.

The car is expected to miss the afternoon’s third practice session due to the extent of the damage.

Luff’s best time of 2:07.23s came in the final minutes, eclipsing an equally late effort from Dean Canto by 0.16s.

The Holden Racing Team driver was luckily to escape a moment across the top of the hill on his own final lap, however, that left the #2 Commodore with a right-rear guard rubbing on the tyre.

“It was one of those moments over the top of the mountain where you brace yourself and think ‘this is going to be close’,” he said. “In the end it was just a bit of a rub with the back wheel.

“We’re very happy with the balance of the car, the guys have made some big improvements between Practice 1 and that session. Hopefully we can keep that momentum going forward.”

Marcos Ambrose went third with his 2:08.4s best inside the final 10 minutes before falling to 16th by the flag.

The day’s third and final practice session will get underway at 1520 local time.