Jack Daniel’s Nissan repairs to go into the night

Jack Daniel’s Nissan repairs to go into the night The #15 Nissan Altima has avoided major structural damage but repairs are expected to stretch into the night following David Russell’s crash in Practice 2.

“The driveline there is nothing too outrageous,” Sinclair told Speedcafe.com.

“It’s a bit annoying it’s (damage) gone up to the windscreen (rear) and up to the top there.

“We’ll pull back all the bolt-on stuff but I don’t think there is anything wrong with the cage.

“Just the rear rail extension is a bit buckled but we will be able to pull that back.

“It’s early days we are just learning the car and the track and we were just going through our planned changes.

“It was nothing outrageous, just a little loose in the rear on entry there.” 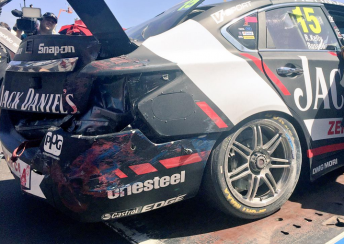 The Altima hit the concrete with its right-rear corner. pic: @v8supercars

Russell said that suspension changes had been performed as the team tried to chase a comfortable set-up for Sunday’s Supercheap Auto Bathurst 1000.

The Brisbane racer admitted that he was feeling where the limit was when the rear broke loose under braking going into The Cutting.

“To be honest everything was going quite well,” Russell said.

“We did a full change on some suspension components where we thought ‘oh well, we’ll try another angle’.

“The car felt reasonably good it was just up over the top we had quite a bit of oversteer so I was just trying to feel where things were at.

“Just phasing up to The Cutting I don’t think I did too much different to some of the other laps.

“I was rolling through in fourth gear and then gearing down it just took a little bit to go into third and then second.

“When you are going through at that sort of pace it doesn’t take much.

“We had a bit of rear locking and there was a bit of moving around and that’s ultimately what happened.”