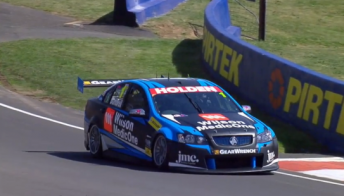 Paul Dumbrell set a blistering pace to top the times in the opening Dunlop Series practice session of the Supercheap Auto Bathurst 1000 weekend.

The Eggleston Motorsport driver was quick from the outset to head the timesheets with a 2:11.0s after his first run, before lowering his personal best to an impressive 2:08.14s late in the session.

Eggleston Motorsport duo of Ant Pedersen and Garry Jacobson were fifth and sixth respectively, although the latter had smoke bellowing from the rear of his Commodore during the session. 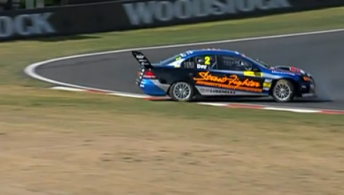 Dan Day suffered a spin at The Chase

Television presenter Grant Denyer finished in 13th spot on his return to the category, while debutant Liam McAdam was 18th.

The action was halted after just five minutes when Dan Day lost control of his Image Racing Falcon at The Chase, which brought out the red flags.

The South Australian dropped a wheel on the dirt which fired him across the track and into the gravel trap narrowly avoiding Aaron McGill.

Luckily Day was able to rejoin the session once his car was retrieved.