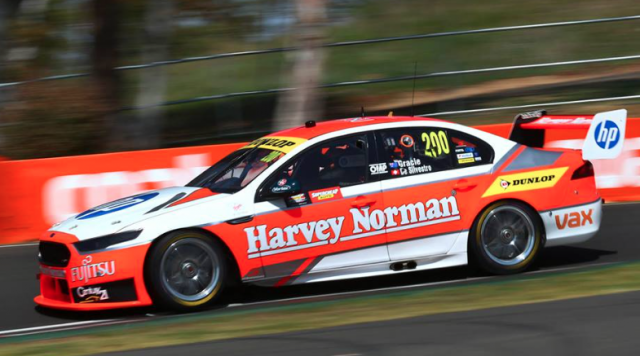 Supercheap Auto Bathurst 1000 wildcard Simona de Silvestro believes there is much more speed to come after an impressive first day at Mount Panorama.

The Swiss IndyCar driver declared herself happy with her debut at the challenging 6.2km circuit, improving across the three practice sessions resulting in a personal best time of 2:09.1s, 3.6s adrift off the pace.

Partnering Renee Gracie in the Prodrive-run Ford, de Silvestro’s only taste of the circuit prior to practice came via a track walk on Wednesday afternoon.

Coupled with the challenge of learning Bathurst, the 27-year-old tackled Mount Panorama with just two days of test mileage behind the wheel of the #200 Ford Falcon FG X the pair are campaigning this weekend.

Encouraged by today’s run, de Silvestro is confident she will find even more pace as her confidence grows.

“There is a lot more time in me,” de Silvestro told Speedcafe.com.

“First off I have to really put a lap together especially on new tyres and it usually takes a couple of tries on new tyres to understand it.

“It was my first time on better tyres. The lap time was ok, I was happy but you know there is so much to gain in extracting pace from the new tyre which I don’t think we really did because I haven’t really figured it out yet.

“I think we can be pretty happy. We are better than we thought we would be, but the last few seconds are the hard ones to find. We have made big steps forward but now we have just got to find the small things.

“Where I’m struggling is the confidence on the brakes. I’m used to an open-wheel car where you can smash the pedal and it stops. This car doesn’t really do that.”

De Silvestro and Gracie’s Bathurst debut has been overseen by veteran V8 Supercar driver and reigning Bathurst 1000 winner Paul Morris who was impressed by the pair’s progress.

“Simona hadn’t been here before but she had done here homework and knew what she was up for,” Morris told Speedcafe.com.

“She is building in confidence and definitely made people scratch their heads.

“When you look back at people who have come here like Mattias Ekstrom she is about what he was doing and if she was going any faster I reckon we would be slowing her down.

“I don’t think we will see her (de Silvestro) full potential until the race.

“Renee is doing her thing and I think she is doing an awesome job.”

De Silvestro is not the only international driver making a Bathurst debut this week with IndyCar star Sebastien Bourdais partnering Lee Holdsworth in the #18 Walkinshaw Commodore.

The Frenchman struggled with the balance of his car but ended Thursday practice relatively happy after posting a 2:08.9s best in Practice 2.

“I have already felt that when the car is balanced decently it is not hard to get it up to speed.

“There is still quite a bit of work to do but hopefully by the time we get to the race we will be all tuned up.

“The time is in ballpark. Obviously we’ve still got to go forward and if we stay stuck there then that it is not good. It is decent I wouldn’t call it good.”