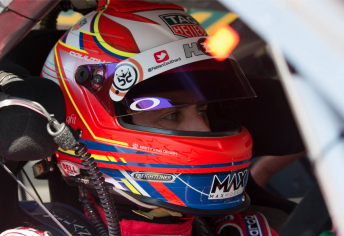 Thursday flyer Fabian Coulthard has indicated that his freshly set record lap could be obliterated in qualifying for the Supercheap Auto Bathurst 1000.

Coulthard posted a scorching 2:05.47s lap on his only crack on a green set of Dunlops which eclipsed his 2014 Bathurst record by 0.13s.

On a blistering 6.2km Mount Panorama circuit the fastest five cars all dipped below 2:06s.

“To go a couple of tenths quicker than I did here last year is pretty special but the way the weekend is panning out it wouldn’t surprise me if it gets broken again,” Coulthard said.

When asked if he thought a sub 2:05s lap was possible, Coulthard responded: “I didn’t think a 5 was possible today. If there is a 4 in it I’ll try and do it.”

Coulthard said he was initially unsure that he had lowered his own record although he was conscious that he was significantly under the reference time that was entered in his dash read-out.

“I just drove to the grip that I had and that was the time that popped up.

“We had one go at it with a green set of tyres and in qualifying you have multiple sets.”