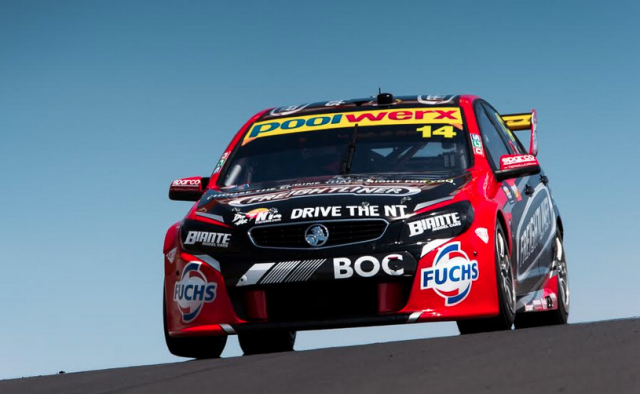 Fabian Coulthard eclipsed his own lap record to edge out Prodrive’s highly fancied Fords for the top spot in Thursday practice at Bathurst.

The Kiwi recorded a 2:05.48s with 60 seconds of the 45 minute session remaining, shaving 0.13s from his previous record time set in qualifying last year.

Mark Winterbottom spent much of the session at the top of the order before being shuffled back amid a late flurry of fast times.

The championship leader responded on his final lap but fell just 0.1s shy of the Brad Jones Racing Holden.

“I could tell by the first practice that it was going to be a pretty quick day,” said Coulthard.

“I thought someone would break the record and I’m just glad it’s me that did it.

“We were struggling a little bit but we put some tyres on and there you go. I’m pretty happy.

“It’s a great feeling, it does everything you expect of it,” he added of the speed.

“It was three and a half seconds better than whatever my (dashboard) reference lap was, so it’s hard to know where you are on the track.”

Shane van Gisbergen made it five drivers in the 2:05s as he was among the late improvers aboard the Tekno Holden.

“Some people have been hoarding tyres to get here and we haven’t,” said Red Bull team owner Roland Dane.

“At the moment we’re just playing with fuel economy and things like that.”

The day’s final session ran green for its duration, with 26 cars on track as Nissan Motorsport continued repairs following David Russell’s crash in the prior session.

Simona de Silvestro lifted the Supergirls wildcard from the bottom of the order, improving 2.5s from her Practice 1 best to record a 2:09.17s.

Practice for the Supercheap Auto Bathurst 1000 continues tomorrow ahead of the afternoon’s qualifying session.

Next Story V8s fall short of 300km/h on opening day