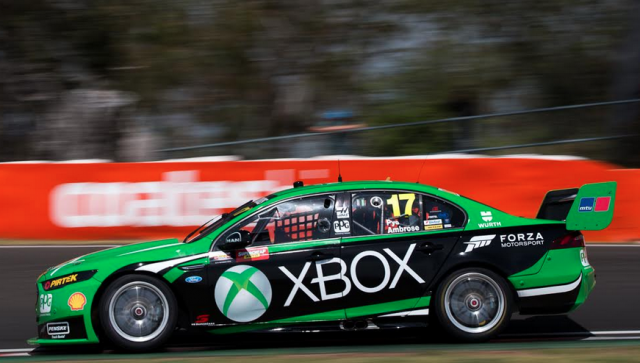 Marcos Ambrose spent today’s co-driver practice session getting reacquainted with the flowing Mount Panorama circuit a decade on from his last appearance in the Great Race.

Completing just two laps at the end of Practice 1, the Tasmanian clocked 15 laps aboard the DJR Team Penske Ford in the second session, recording a best of 2:08.4s to end up 16th fastest.

Ambrose had not turned a lap at Bathurst since the last of his five Great Race starts ended against the concrete at The Cutting in 2005.

“It’s great to be back going around Bathurst and the track felt really good out there,” Ambrose told Speedcafe.com.

“It was just about getting reacquainted with the flow. Going across the top you have to have a lot of flow to it. I was certainly getting there by the end of that run.

“The surface is grippier, the kerbs are lower and the cars are better (compared to when I was last here).”

The improvements to the circuit and cars over the last decade ensured Ambrose’s 2:08.4s best in Practice 2 was 0.4s quicker than his qualifying time from 2005.

The 39-year-old’s best time came shortly after putting on a second set of practice tyres.

“We were running on old tyres, so we won’t really know where we are until the race because I’ll stay on old tyres until then,” he added.

Ambrose famously scored pole for his first Bathurst start in 2001, but failed to score a single podium finish in his five starts.