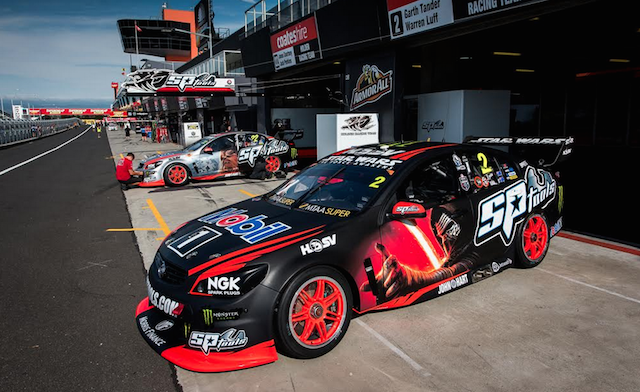 The Holden Racing Team Commodores in the Bathurst pitlane

V8 Supercars has underlined its firm stance against fuel trimming devices following disagreement over the legality of a system deployed by Walkinshaw Racing at Sandown.

Economy again looms as a crucial factor in this weekend’s Supercheap Auto Bathurst 1000, where teams will aim to minimise the stationary time for their cars during the seven compulsory pitstops.

Complex fuel trimming systems that manipulate fuel pressure have long been outlawed in the interest of cost saving, while fuel trim switches were banned at the end of 2012.

It is understood that Walkinshaw Racing had used a relatively simple driver adjustable throttle stop on its cars for Sandown, preventing full throttle in order to save fuel when needed in the race.

V8 Supercars’ technical department subsequently investigated the system and, while no penalties have been forthcoming, it will not be seen at Bathurst.

“For the avoidance of doubt, fuel trimming during a race is prohibited,” read a note sent to teams ahead of this weekend’s event.

“The S&TD (Sporting & Technical Director, David Stuart) in his sole discretion, which will not be subject to any protest or appeal, has the right to deem any form of program, device, system, component(s), mechanism(s) that aid the Driver in adjusting or trimming the air fuel mixture during a race as fuel trimming.”

Walkinshaw Racing managing director Adrian Burgess told Speedcafe.com that his team is disappointed that its system has been outlawed.

“We had a difference of an opinion on it, but now you see the clarification on what they want and what they expect. They’ve re-written the rule and we’ll have to do things slightly differently.

“It’s a little bit disappointing when teams should be able to think creatively and be encouraging their engineers to be engineers.

“I think our engineers came up with a good solution and now you’re getting involved in other teams politicking and it blew into a bigger situation than it really was.

“At the end of the day we didn’t win a race out of it or anything. It’s no different than a driver moving his foot wherever he wants.”

Economy in this year’s race will meanwhile be affected by a new drop gear ratio being used at the venue, which has received much attention due to its potential to propel the cars beyond 300km/h on Conrod Straight.

The change is expected to hurt fuel economy, while overall lap speeds are thought likely to decrease due to the time lost climbing the Mountain.

Teams will have their first run on the circuit in the revised configuration during three practice sessions tomorrow.