Courtney: Racing at Bathurst could have killed me

Courtney: Racing at Bathurst could have killed me James Courtney was warned that he could pay the ultimate price racing in this weekend’s Supercheap Auto Bathurst 1000 before the decision was made to remain on the sidelines.

Courtney confirmed to media in the Holden Racing Team garage at Bathurst this morning that he has not received medical clearance to compete in the Great Race.

The 2010 V8 Supercars champion will again be replaced by veteran Russell Ingall, who will line up alongside Jack Perkins.

Officially ruled out by his surgeon on Tuesday night, Courtney flew to Bathurst this morning and will spend the weekend supporting the team.

Courtney said that the potential consequences of racing this weekend after suffering five fractured ribs and a punctured lung at Sydney Motorsport Park in August were dire.

“With the bones at the back not being fully joined, if I had an accident or a coming together with someone it could break and cause a rapid deflation of the lung and squash the heart and then you’re not around any more,” he said.

“With the pressures here at Bathurst, if it was on the left side you’d have more of a chance, but with it being on the loaded side for a 1000km race and what could go on in the driver changes it’s best to sit it out.”

Despite the severity of the injury, Courtney says he’s given no thought to taking an extended absence from racing and will be back as soon as the Castrol Gold Coast 600 in two weeks time.

“We’ll continue to scan the bones, they’re really happy with how they’re doing and now it’s just all the physio side of things to get full range movement in my arm again,” he said.

“We need to get all the muscles working again to get full lung capacity to be able to do what we do. A lot of people don’t realise how much effort goes in to driving these cars.

“We’re focussed on getting all that sorted and have a program that’s in place to get ready for the Gold Coast. Fingers crossed there’s no hiccups and we can get there.”

The 35-year-old was however not hiding his disappointment at missing the season’s biggest race, which he is yet to win, describing himself as “massively annoyed”.

“It’s our grand final, it’s the one race that stops the nation for motorsport here in Australia and to be taken out through no fault of my own is massively annoying,” he said.

“With the circumstances of the way it happened… it’s the race we all live for and I can’t do it, so I’m gutted.”

Courtney’s injuries were the result of a Navy helicopter disturbing pit equipment while flying low over the Sydney Motorsport Park pitlane during a demonstration at the V8 Supercars event.

Although he has received no update on the Navy’s investigation, Courtney says he expects action to be taken from within his own camp due to the commercial losses that have resulted from his injuries.

“My job at the moment is to get ready and sort myself out. Behind the scenes management and the team are definitely investigating it all and I’m sure something will happen with it,” he said.

“There’s been quite a big commercial loss for the team, myself and everyone involved. It’s quite a big deal.” 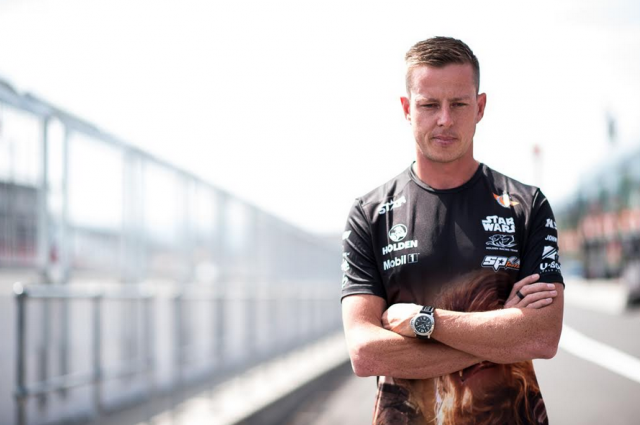 Courtney in the Bathurst pitlane