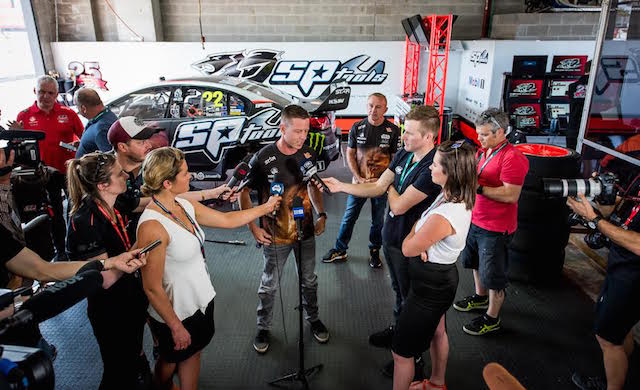 The Holden Racing Team spearhead Adrian Burgess is optimistic James Courtney will return for the Castrol Gold Coast 600 from October 23-25.

Courtney faces another scan to determine whether his extensive rib, muscle, tissue and cartilage injuries have healed enough to warrant a return to competition.

After being ruled out of the Supercheap Auto Bathurst 1000, Burgess said Courtney faces a far better chance of gaining medical clearance for his home event.

“The percentage is getting higher by the day. We probably missed this event by a week,” Burgess told Speedcafe.com.

“But we still need to keep him in good shape. He needs to get himself back in the gym and start to get some of the muscle back in place.

“And we will be reliant on another scan which will be the week of the Gold Coast.

“We are not saying it’s 100 percent but it’s a far better chance than we’ve managed to have this weekend.”

Burgess said that going against medical advice and running the risk of naming Courtney alongside Jack Perkins this weekend had not been remotely considered.

“It doesn’t even cross your mind. It’s not more important than somebody’s health,” Burgess said.

“And if it was any of the other drivers it would have been exactly the same decision.

“We don’t want him to come back too early and then it impacts on the end of the season or even the start of next year.”

Courtney’s replacement Russell Ingall says he is better prepared for the mountain challenge than at Sandown where he managed a solid job to finish ninth.

“I was a bit under done for Sandown,” Ingall told Speedcafe.com.

“But I’ve hit the gym pretty hard and I’ve lost a few kg’s. I’m definitely a lot better prepared for this weekend.

“You forget how hot and how physical these cars are to drive.

“We are going to have a good stab at it and there is no reason why we can’t stand on the podium this weekend.”