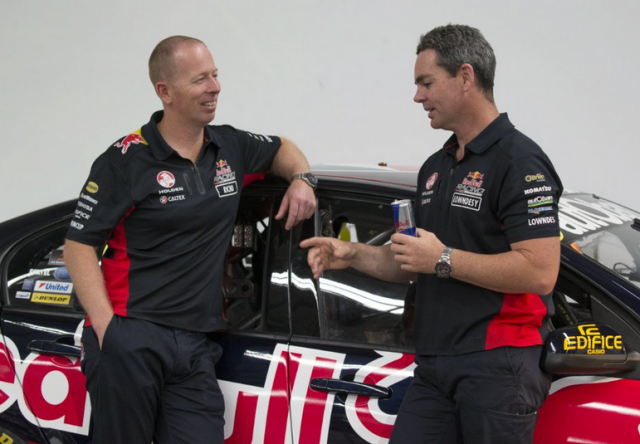 Craig Lowndes hopes that a big weekend at Bathurst can help turn the tide in the V8 Supercars title fight against Prodrive’s formidable three-car attack.

Lowndes heads to Mount Panorama following a disastrous Sandown 500 that has left the Red Bull Holden star fourth in the championship behind Mark Winterbottom, Chaz Mostert and David Reynolds.

Currently 423 points behind leader Winterbottom, anything less than a strong result in the 300 point Bathurst 1000 will spell disaster for Lowndes’ already against-the-odds bid for a fourth title.

Although Prodrive’s speed this season has the Ford squad well placed for Bathurst, Lowndes’ impressive record in the October classic has the 41-year-old brimming with confidence.

Lowndes has five Bathurst wins and 12 podiums to his name. He will surpass Peter Brock, Jim Richards and Larry Perkins for the top spot on the all-time podiums list if he can score a top three finish this weekend.

The fan favourite missed the podium last year after a late drive-through for punting Mark Winterbottom in an incident he later blamed on glare from the setting sun.

“If you have a bad weekend like we did at Sandown it puts a big dint in your championship aspirations,” said Lowndes.

“For us it’s a really important weekend to get good points and try and get on that podium.

“It’s been a great hunting ground and there’s no doubt we go there with a lot of confidence.

“If we can stay clean and not get any sun glare, we should be right for a good podium.”

This weekend marks Lowndes’ 22nd Bathurst 1000 start having debuted at the famous venue with the Holden Racing Team in 1994.

Arriving in Bathurst alongside many of his fellow drivers and teams on Tuesday, Lowndes admits to still getting nervous ahead of the big race.

“If you didn’t get nervous you shouldn’t be in the job,” he said.

“There’s emotions that you always get driving across the Blue Mountains and into Bathurst.

“You get goosebumps because it’s a very special place and is dear to all our hearts.

“Then come the start of the race on Sunday the hype and all the emotions will come.

“There’s no doubt you get butterflies at the beginning, but they’re excitement butterflies, they’re not nerves or about being scared of it.”