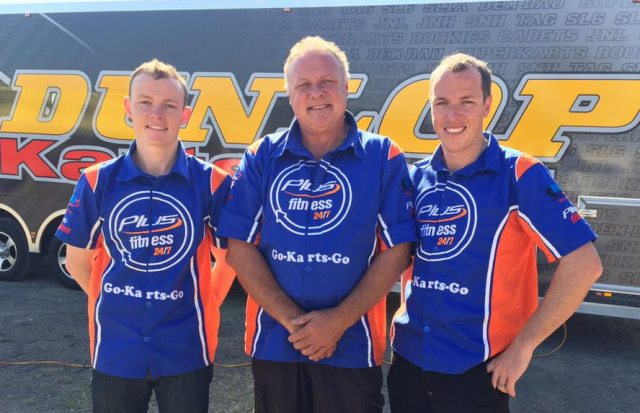 Novocastrian Motorsport’s wildcard entry promises to bring a much missed dose of privateer spirit back to the Supercheap Auto Bathurst 1000 this week.

The Russell family operation is the first Dunlop Series team to field an independent wildcard in the race in six years, competing against a field of professional teams.

While Garry Rogers Motorsport has prepared the Tony Klein-owned Holden for the event, Novocastrian took delivery of the car last Wednesday and will be left to its own devices at Bathurst.

The car will be driven by brothers Aaren and Drew Russell, who will also team up in the former’s Dunlop Series Ford for the 250km support race.

Team manager and father of the two boys, Wayne Russell, says that the crew’s arrival at Bathurst today will be a victory of sorts for the small outfit.

“You just don’t realise how much work goes into a race like this until you step up and do it,” Russell told Speedcafe.com.

“It’s not that we’re any less professional then the big guys, but there’s no doubt we’re a true privateer team.

“We’ve been able to do what we are doing because of the help of some very good people who believe in the team, both in terms of sponsors and staff.

“Ninety percent of our staff are volunteers, so they’re all taking a week off work and getting ready for a massive few days.

“Aaren has also put so much work in to make it all happen, sorting all the bits and pieces, as well as working with GRM and Prodrive. I’m a very proud dad to say the least.

“To run against the main game guys as a privateer is really, really difficult and we’re realistic about where we sit in that.”

The #62 Fitness Plus-backed entry will share a pit boom with the second wildcard, a Ford run by Prodrive Racing Australia for Renee Gracie and Simona de Silvestro.

Prodrive will look after the wheel changes during pitstops for both wildcards, easing the burden on Novocastrian’s own crew.

Just 10 staff will look after the running of the team’s Holden and its Dunlop Series Ford on the Mountain, including engineer Matt Boniface.

The look of the car, which will mimic that of the team’s Fitness Plus Dunlop Series entry, is expected to be unveiled at Bathurst later today.

“There are a lot of people that have been following the boys that are excited about this, more than we ever expected,” continued Russell of the public’s reaction to his team’s effort.

“We’ve run supporter packs that include a shirt, a cap and their name on the boot of the car. We’ve had 100 or so people and businesses support that. It’s those little things that mean the world.”

Novocastrian bit the bullet this year and leased the GRM Commodore for Bathurst after previous pleas to be allowed to run Dunlop Series chassis in the Great Race fell on deaf ears.

The introduction of the Car of the Future into the Dunlop Series next year will align the two tiers for the first time since 2012 and could see more teams follow in Novocastrian’s footsteps.

While Russell is one of many Dunlop Series team owners unsure of how his team will be able to afford to upgrade next season, he is hopeful that Bathurst may open up a main series opportunity for his 24-year-old son.

“We’re just waiting to see how it all unfolds,” said Russell.

“I’d love to not be running a Dunlop Series car next year and for Aaren to be picked up by a main game team. That’s our ultimate dream. This really is to fly the flag for that.”