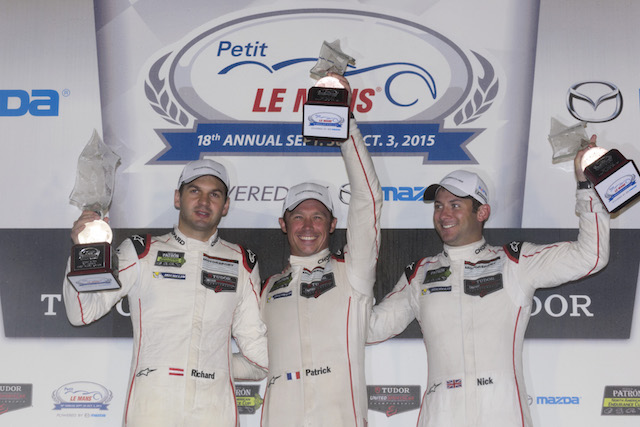 The effort of the Action Express prototype crew to claim the final podium spot was good enough to bank consecutive United Sportscar crowns.

The Porsche GT, however, was comfortable in the tricky conditions which saw several cautions thrown for standing water on the track and a string of incidents.

“We had to start from the back of the field, but Nick put in an inspired first stint and laid the foundations for this incredible victory,” Pilet said.

Chip Ganassi’s Riley Ford runners of Scott Pruett, Joey Hand and Scott Dixon finished fourth outright and second in their class after a troubled beginning when the car was forced to start from the pitlane after an alternator problem.

Prototype Challenge was taken out by the PR1/Mathiasen Motorsports Oreca-Chevrolet of Tom Kimber-Smith, Andrew Palmer and Mike Guasch.

The CORE Autosport Oreca-Chevrolet ploughed into the fence however it did not stop Colin Braun, Jonathan Bennett and Anthony Lazzaro from taking a second straight PC title. 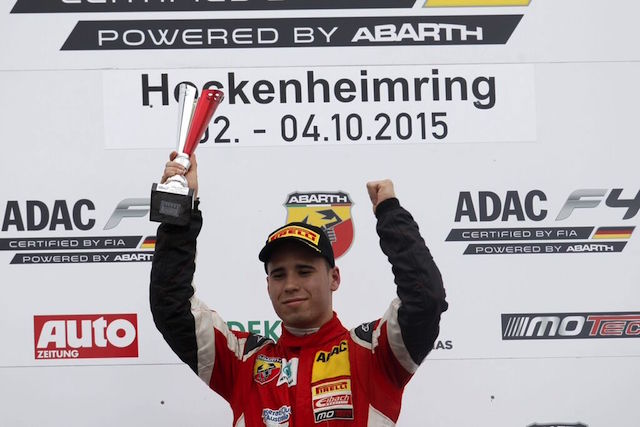 Australian Joey Mawson has finished his German Formula 4 campaign on a high by winning the final race of the Hockenheim round.

Starting from pole position for the final 30-minute encounter of the year, Mawson paced the field for every lap.

The race was punctuated by a red flag and a pair of safety car periods.

Despite coming under pressure on every restart Mawson remained solid, heading the 36-car field to claim his fifth race win of the year.

In the opening race Mawson had to pit for repairs to his front wing which dropped him to 31st before charging through the field to finish 10th. Series leader Marvin Dienst took the victory.

In race two he was in third place when the two cars in front of him collided, sending one of them somersaulting into the gravel trap and bringing about a premature end to the race.

The results were then taken from the previous lap meaning the two cars that crashed and caused the red flag David Beckmann and Lando Norris were awarded first and second place for the race with Mawson third.

Mawson’s results saw him secure third in the championship behind Joel Eriksson and champion Dienst. 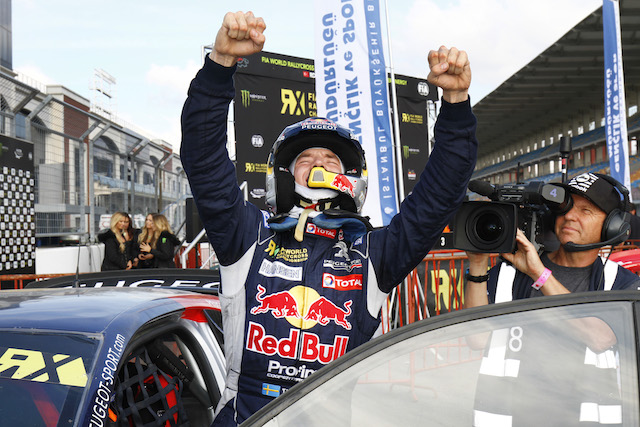 Timmy Hansen has closed the gap to Petter Solberg

Timmy Hansen has cut into defending champion Petter Solberg’s lead following his win in the Turkey round.

There is now 19 points separating Hansen from leader Solberg with two rounds remaining.

“We lost too many points this weekend which isn’t so good for the Championship. The pressure is really on for Italy,” Solberg said.

The Norwegian failed to make today’s final after he broke his car’s driveshaft in the first semi-final and nursed his Citroen DS3 Supercar to the finish.

EKS driver Mattias Ekstrom was top qualifier at the end of the four heats and scored the maximum 16 points available.

The two-time DTM Champion made contact with his team-mate Anton Marklund during the final, however, and ended up fourth, with Marklund sixth.

Fifth overall was Frenchman Davy Jeanney who had another solid run in his Peugeot 208 WRX Supercar to help Team Peugeot-Hansen further extend its lead in the overall Teams’ Championship.

Onslow-Cole, who earned the drive in Turkey RX by winning the RX Talent Search at Lydden Hill back in May, showed good pace and racecraft throughout the weekend.

The penultimate round of the FIA World Rallycross Championship will be staged in Franciacorta, Italy, from October 16-18. 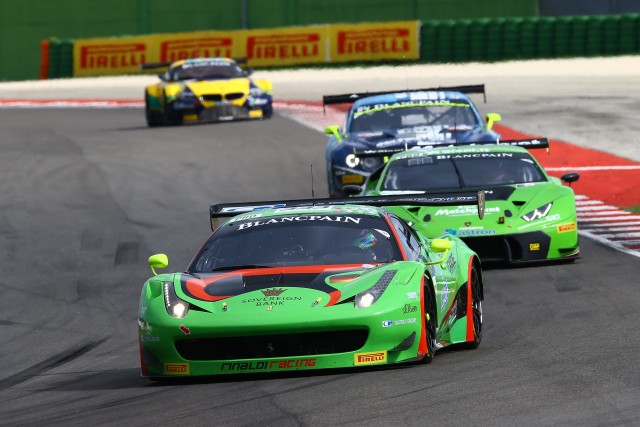 The Rinaldi Racing duo of Marco Seefried and Norbert Siedler boosted their Blancpain Sprint Series title hopes with a double victory at Misano.

The Ferrari 458 pair began the weekend by completing a lights-to-flag victory in the qualifying race as they led home the Grasser Racing Lamborghini Huracan of Mirko Bortolotti and Patrick Kujala.

Vanthoor made contact with the HTP Bentley of Jules Szymkowiak which saw the pair spear into the barriers at high speed.

The Belgian limped from the wreckage and although cleared by the medical centre his participation in the final round at Zandvoort this weekend is in doubt.

Sunday’s main race provided a thrilling battle at the front with Seefried and Siedler briefly losing the lead to Bortolotti and Kujala.

However, the Ferrari duo soon redressed the situation before opening up four second lead prior to the mandatory pit stops.

The lead grew to six seconds after the pits stops which Siedler maintained until the chequered flag.

The HTP Bentley of Maxi Buhk and Vincent Abril managed to pass the Bortolotti/Kujala Lamborghini to secure second.

With championship leaders Vanthoor and Frijns absent, Buhk and Abril have closed the gap to eight points with Siedler and Seefried 17 points further back.