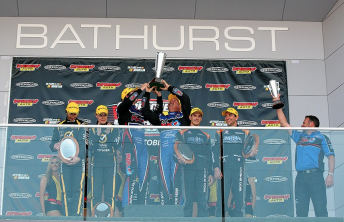 Who will take home the Peter Brock Trophy this year?

Betting markets have Jamie Whincup and Paul Dumbrell as the favourite, but who do you think will take out this year’s Great Race?

Prodrive Racing Australia has the runs on the board in the championship to date and heads to Bathurst following an impressive one-two finish at the Sandown 500.

Mark Winterbottom/Steve Owen came out on top of Chaz Mostert/Cameron Waters at the Victorian venue, but the intra-team battle can be expected to be as hot as ever on the Mountain.

Prodrive’s third entry of David Reynolds/Dean Canto is also expected to be well in contention, with both drivers hungry to improve on their second place finish from 2012.

The Holden Racing Team is also not to be discounted, although the strength of its attack will depend in part on the fate of James Courtney’s efforts to be fit for the event.

Others will likely need a strong dose of fortune to go their way in order to take out the trophy, but as last year’s eight-hour epic proved, the Mountain is anything but predictable.

Who do you think will win this year’s Bathurst 1000? Cast your vote below.