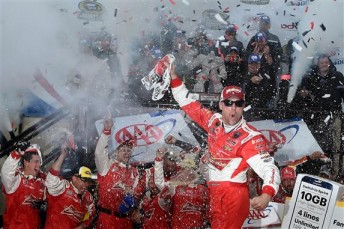 Harvick has hit back at Dover

Kevin Harvick did what he needed to do at Dover; win and keep his NASCAR title defence alive.

Sitting 15th in points as the first round of the Sprint Cup playoffs rounded out at Dover, Harvick dominated the race leading 355 of the 400 laps and gaining automatic promotion to the next phase of the Chase.

Harvick was unstoppable. Despite starting on the eighth row, he got to the front quickly to take the lead by Lap 26.

It was his first victory at the Monster Mile in any NASCAR national series.

“Obviously we weren’t in a great position coming into today,” said Harvick, “But this is what it’s all about — these big-time moments. We’re better than we were last year just because of all the experiences we’ve had.”

Good news for Harvick but bad for six-time champion Jimmie Johnson, who has been eliminated from championship contention along with Jamie McMurray, Paul Menard and Clint Bowyer.

Johnson, a 10-time winner at Dover, saw his Chase end when his car’s differential fail.

McMurray’s fourth place finish was one place behind Dale Earnhardt Jr. who advanced because of a tiebreaker.