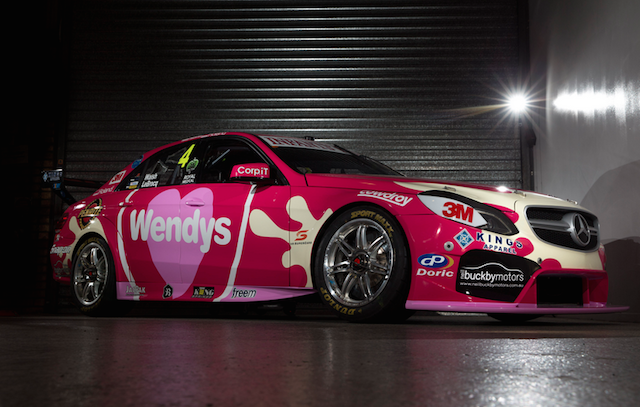 Erebus Motorsport has unveiled a second major sponsorship deal in the lead-up to the Supercheap Auto Bathurst 1000.

Following the reveal of its Penrite-backed Will Davison/Alex Davison Bathurst livery last week, the team has announced a primary sponsorship from Wendy’s for its Ash Walsh/Jack Le Brocq entry.

The striking pink look will debut at Bathurst and also feature at the year’s remaining Australian events at the Gold Coast, Phillip Island and Sydney Olympic Park.

Wendy’s first step into V8 Supercars follows the recent appointment of CEO Karin Hattingh, who has been charged with reinvigorating the 36-year-old ice cream brand.

There are currently 155 Wendy’s stores operating through a franchise network across Australasia following significant closures in recent years.

“Getting into motorsport is quite a step away from where we would normally focus our activities, so this is a genuinely exciting venture for us,’’ said Hattingh.

“We like the idea of fresh, eye-catching and edgy, so were are very keen to see the bright pink Wendy’s car going around at Bathurst.

“We’ve been around for a long time. This is our first step into the field of V8 Supercars but I see it as a perfect fit – big, loud, professional and fun for the fans.

“Our customers are much like racing fans – there is a plenty of colour, lots of noise and everyone is ready to have a great experience.”

Erebus team owner Betty Klimenko says its a positive sign for V8 Supercars to be attracting brands outside of the traditional market segments.

“It brings a fresh feel to the field and shows that it is not all oil, trucks and energy drinks,” said Klimenko.

“They bring a new and fresh outlook to the sport and like myself, think outside the box.

“I finally get to have a pink car, and love the way the Wendy’s management thinks. For their first time in the sport, they are coming in with new ideas and a fun and exciting feel to the way they do things.

“This partnership marks a new way of partnering for the sport and I hope other companies that are not usually involved with V8 Supercars follow Wendy’s example and take the plunge.

“We have quite a few female fans and I am sure they are going to fall in love with the car, the concept and the fact that the CEO of Wendy’s and myself are both females.

“The face of V8 Supercars is definitely changing and I am thrilled to be a part of it.” Walsh poses with the new-look Mercedes