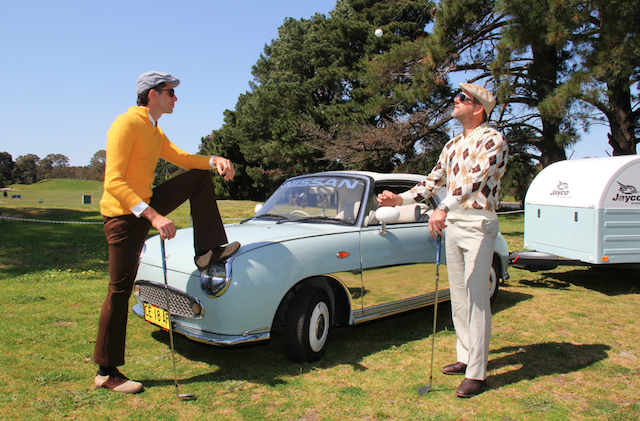 The Kellys pose with their Bathurst ride

Todd and Rick Kelly have acquired a rare Nissan for their annual road trip to the Supercheap Auto Bathurst 1000.

The brothers are travelling from their Melbourne base to the event in a 1991 Nissan Figaro, complete with retro-styled caravan from team sponsor Jayco.

Approximately 20,000 of the Figaros were sold in Japan following the model’s launch in 1989, each powered by a 987cc, four-cylinder turbo engine that produces a quoted 56kw.

A Nissan Navara NP300 and second caravan will join the two-seat Figaro on the trip, allowing Rick’s co-driver David Russell to join in on the relaxed Bathurst build-up. 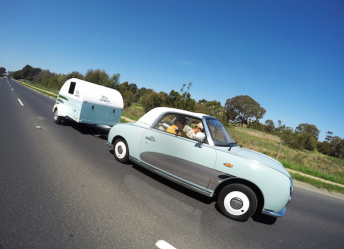 The Figaro follows Bathurst road trips in Nissan G60 Patrols and a Bluebird over the last two years and marks a stark contrast from earlier adventures in an array of muscle cars from General Motors.

“For Todd and me, the Bathurst road trip is a tradition, we’ve done it for 12 or 13 years now, and it all started back when Todd, I and Nathan Pretty drove a camper van up to Bathurst,” explained Rick Kelly.

“The whole idea was to take a day and half to get there, and arrive in a good frame of mind.

“I think we certainly achieved that, and since then we have just carried on the tradition.

“Over the years it has developed into something quite unique; we generally pick a car now that is a little older, have a theme, whether it’s 1950s, ’60s, ’70s, or ’80s, and we dress accordingly to the era of the car, which just adds a little bit of fun.

“We take a couple of days to arrive in Bathurst, we try to come into town in style, and a certain sense of achievement getting whatever car it is that we’ve driven to Bathurst.

“This year it’s hard, how do we top all of the cool cars and outfits we’ve had over the years?

“Of course, how could you beat a Nissan Figaro? It’s a very unique car, it didn’t actually get brought into Australia, and this one has come straight from Tokyo in only the last few weeks.

“Since we’ve taken delivery, I’ve absolutely fallen in love with it; it’s a nice little car, a one litre turbo, and just a lot of fun.”

For brother Todd, this year marks a decade since his one and only win in the Great Race, where he took victory with the Holden Racing Team on his 26th birthday. 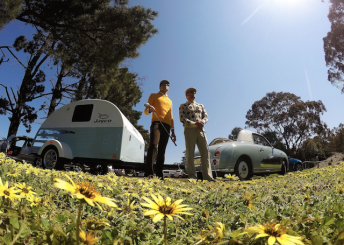 Todd says that the combination of the Figaro and caravan will provide a relaxed build-up to this year’s event.

“The Nissan Figaro is completely Rick’s deal, so I can stand back and wipe my hands clean of the expedition if we get picked on, or I can say it was half my idea if people like it,” he joked.

“It’s a cool little car, it’s got fairly reasonable technology and age for something that looks really cool and retro, I think it’s going to be perfect for what we’re doing, and it’s comfortable too.

“I’m really looking forward to the road trip this year because we are making a few stops this time along the way at Jayco caravan parks.

“Doing a bit of caravanning along the way will be a nice change of pace.

“We’ve been doing this for many years now, and it all started with more a relaxed itinerary with a bit of roadside camping, then we moved into motels, which were as fancy as you could get on the back road to Bathurst.

“It was good, but I think it’s better to get back to a caravan park at the end of a long day of driving, cooking a BBQ, and relaxing.

“This is really going back to how it used to be, and I can’t wait to get on the road.”